It was hard, but we won: despite the severe, bad weather, we could capture the May 2019 “Blue Moon” at dawn, before it set in Rome. And it was great. 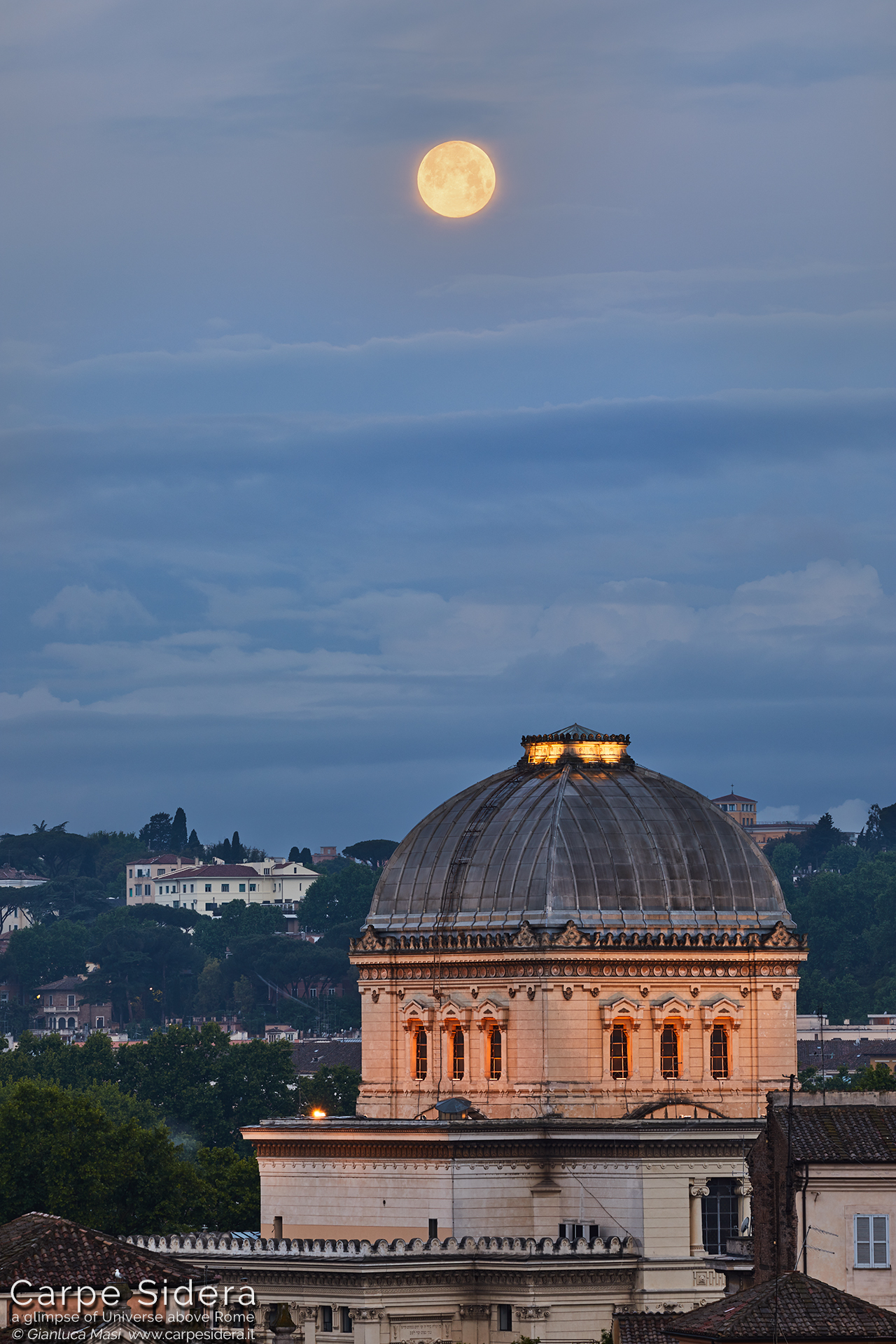 I must say this Spring has been so far a pain for Italian star lovers. Almost a couple of months in a row of bad weather, making hard to cover the beautiful shows the sky is always ready to offer. Among them, the so-called “Blue Moon”.

Let’s make it clear: the name “Blue Moon” has nothing to do with the color of the Moon. It is just a way to call a particular full Moon.

This way, we can have four full Moons during a given season (lasting three months) or two full Moon in given month.

The relative rarity of this event is the origin of the “once in a blue Moon” sentence, indicating something happening not so often.

In short, the occurrence of such a blue Moon is a great opportunity, once again, to look up and discover there is a huge, wonderful panorama over there: the starry sky.

Unfortunately many of us live in huge cities or urban areas with so much artificial light that it is impossible to even see a fistful of stars. This contamination is called “light pollution” and it is something we should contrast for what it is: a form of pollution and a huge waste of resources and money.

Everyone should take care of the firmament and its immense, ancient cultural value, keeping it for future generations. During my outreach activities to increase awareness about light pollution, I have understood that one of the main obstacles to overcome is exactly this: those living in a city do not see the stars, so they really do not realize there is such a huge, beautiful and precious heritage – the starry sky – on the brink of extinction.This makes much harder to raise people awareness about the light pollution issue.

This is why I’m never tired to invite people to look for the stars from their cities. Doing this, they see how rewarding this experience is and they desire to enjoy the night sky more and better. At this point, they understand what they can do to succeed. It becomes possible to involve them and spontaneously promote responsible actions and behaviors, preserving the upper side of the natural scenery, useful to limit the crazy increase of artificial light in the natural environment. Promoting and sharing the beauty of the night sky is the best action to preserve it. 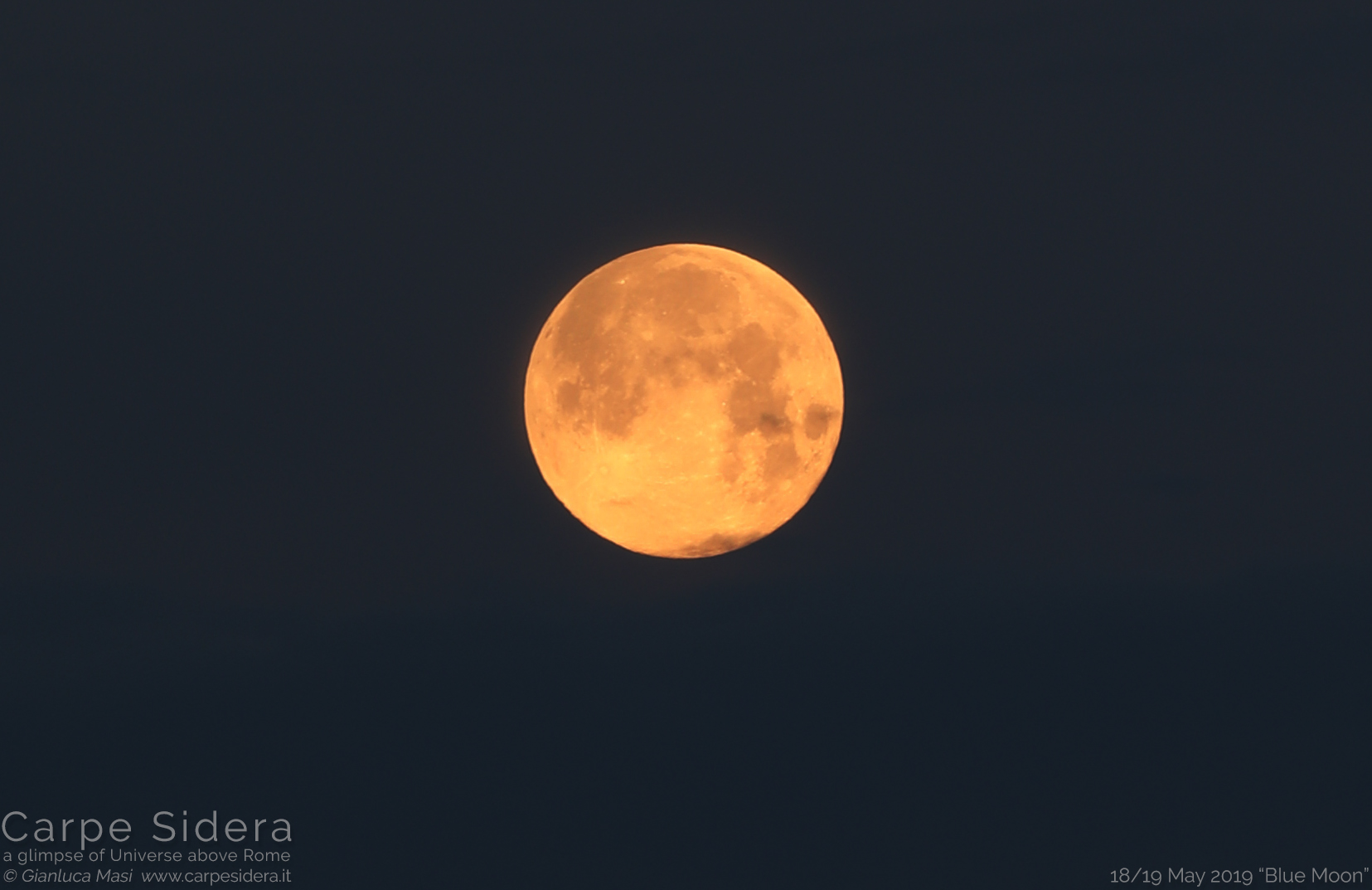 This is why I welcome every astronomical event accessible for the city. I’m very proud to be an Ambassador of the “Dark Skies for All” program of the International Astronomical Union. Of course, the “Blue Moon” is perhaps one of the most popular events to promote a better awareness of the night sky!

At Virtual Telescope we planned a live feed covering the Blue Moon rising, at sunset, above Rome, but weather was – of course! – horrible. Later, the Moon showed often among irregular clouds, but I did not want to capture it in the middle of the night, as I love to take images while all around you still have some natural light. This happens at sunset (when the full Moon rises) and at dawn (when the full Moon sets).

My only hope was that a dawn I could have a break in the clouds. It was just a weak hope, as weather forecasts were terrible (and while I’m writing rain is falling like crazy).

I woke up at 05:00 AM, in the middle of dawn. I saw a lot of clouds up there, nonetheless I decided to go to the site I carefully selected to offer me a precious alignment: the setting “Blue Moon” just above the Great Synagogue of Rome. I must say it was a hard decision: it could start raining every minute and I was going to have some precious hardware exposed to mother nature. 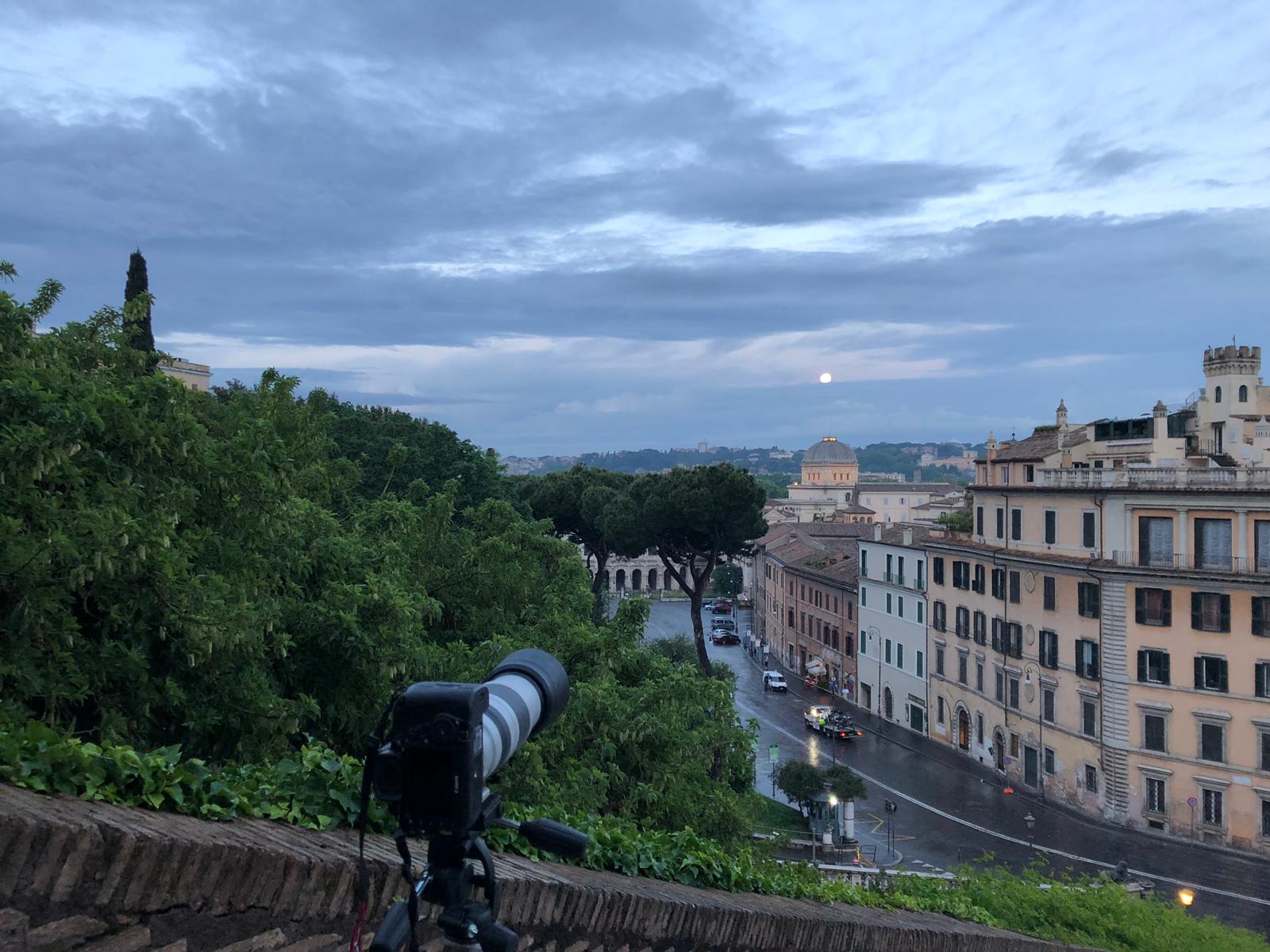 Ready to image, while the Moon is visible trough clouds

My final decision was a “go” and very quickly I had my imaging gear ready: one of my Canon 5D mIV DSLR bodies and a Canon EF 100-400mm f/4.5-5.6L IS II USM lens, both on a steady tripod. The situation was far from the ideal, but… I was lucky!

Clouds left the setting Moon free to show for a few minutes and I had my well deserved prize: some very nice images of the “Blue Moon” hanging above the Synagogue. In a few images the Moon was perfectly visible, even if clouds have been around it all the time.

In short, waking up so early was a great decision and the Moon and the clouds awarded me with a nice sight.

What is going to put its show, next time?