Likely, you have heard about near-Earth asteroid 2011 ES4. It was “lost” and it was predicted to have a very close, but safe encounter with our Earth. A few days ago, it was “rediscovered” and it passed significantly further from us. All this in perfect agreement with what we knew. Last night, we imaged it. 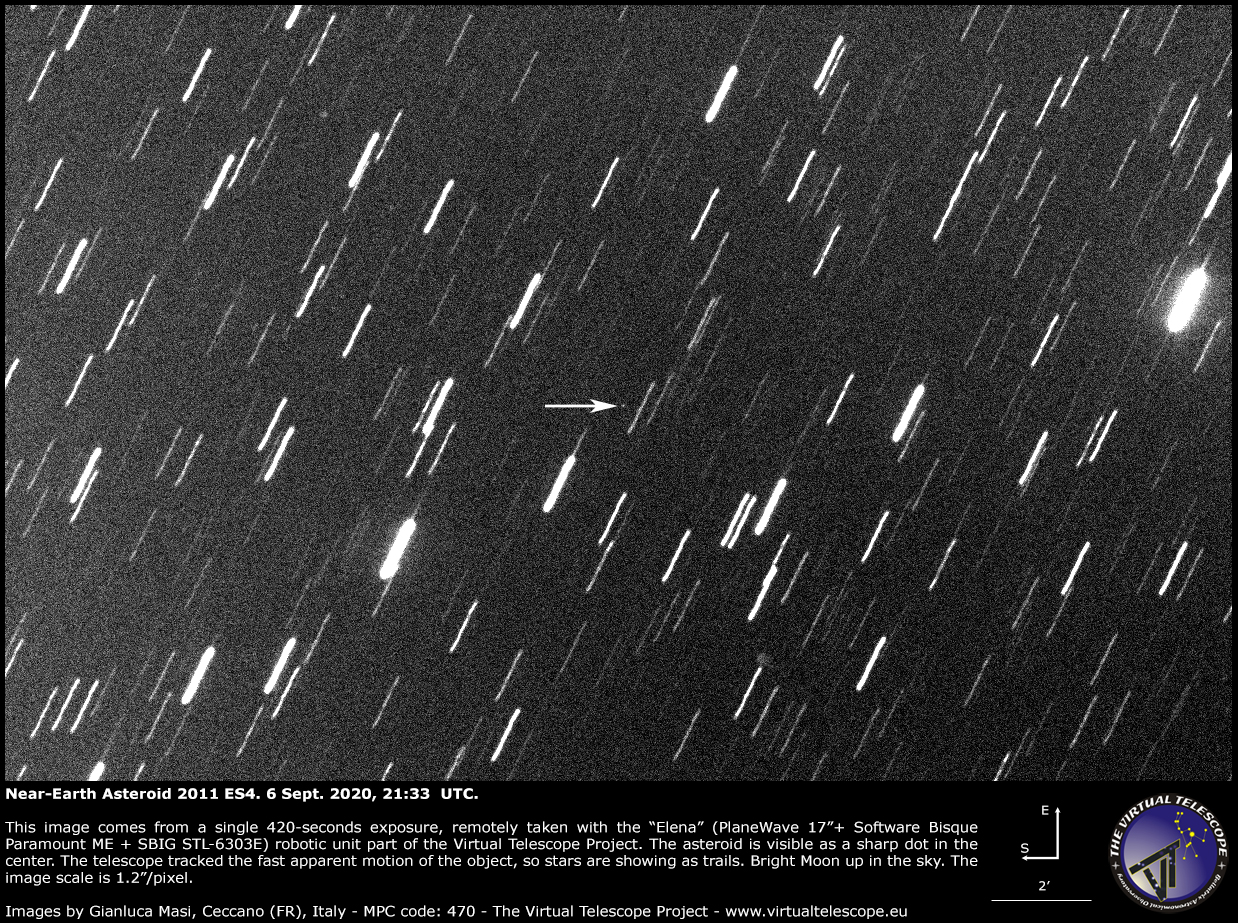 The image above comes from a single, 420-seconds exposure, remotely taken with the “Elena” (PlaneWave 17″+Paramount ME+SBIG STL-6303E) robotic unit available at Virtual Telescope. The telescope tracked the fast apparent motion of the asteroid, this is why stars show as long trails, while the asteroid looks like a bright and sharp dot of light in the center of the image, marked by an arrow. A very bright Moon was up in the sky, making harder to find such a faint body.

You know: at the Virtual Telescope Project we have been tracking near-Earth asteroids many times since the beginning of our adventure. Why? Because we love asteroids, especially those approaching our planet. Over the last few months, some of the press spotted one of these close approachers, namely asteroid 2011 ES4, attracted by the fact it could have a very close encounter with our planet, nominally coming as close as 1/3rd of the average lunar distance. That is 120000 km, more or less: which is an absolutely safe distance, by the way, and not so rare to see.

But here was much more to say about 2011 ES4, even more interesting than the nominal minimum distance above. Let’s try to have a closer look.

As its designation says, this asteroid was discovered on March 2011, more than 9 years ago. It was observed just for four days, then it was lost: being a small object (22 – 49 meters in diameter, source Nasa/JPL), it became very faint, then invisible, as soon as it moved far away from the Earth. And here it is the point: when you “measure” something, you have some uncertainties on the values you get. Most importantly, those uncertainties affect your predictions about the future of what you are studying. And these uncertainties on the future predictions grow as you go further in time from the original data. Uncertainties are very important, vital I would say, in science.

I think this must be very clear: we observed 2011 ES4 for four days in 2011, nine years ago. These measures had uncertainties, as normal in experimental science: so, the orbit calculated from those observations incorporated those uncertainties, being itself uncertain to some degree. And all the predictions done from such an uncertain orbit had, of course, their uncertainties. This is where statistics comes into play: you can still predict something, giving the probability to see that happening. I find this amazing (I know, I’m biases, as I love Math, too).

To make it short, from the orbit based on 4 nights of observations back in 2011, astronomers predicted that 2011 ES4 was likely coming back for a close encounter with us sometime between late Aug. and early Sept. 2020. At Nasa/JPL they listed 2011 ES4 has reaching its minimum distance from us on 1 Sept 2020, plus or minus eight days: those extra days simply reflected the uncertainties on the original observations done in 2011, propagated into the future. It was a big interval, as we were predicting something nine years after the very few observations we collected at the discovery time. So, at first, we had a temporal interval on the date of the close approach.

But also the minimum distance from us had its large uncertainty. Again, Nasa/JPL reported that this rock could be, at the time above, somewhere between 70000 km and 16 millions of km, with the most probable distance of 120000 km. You must note this: even in the worst (closer) case, there was not any impact risk. Seeing scientists reporting uncertainties mean they are doing a good job.

To summarize: nine years after the few observations we had of 2011 ES4, covering just 4 days, the uncertainties on the prediction of the upcoming close approach affected both the time of the event and the effective minimum distance of the asteroid from us. These huge uncertainties made almost useless to perform an explicit search to recover 2011 ES4: the sky region to search, reflecting them, was very huge. It was much easier to consider such a recovery as a byproduct of the robotic surveys scanning the skies every night.

And this happened, indeed: on 5 Sept., astronomers at the Panstarrs survey serendipitously spotted an object that was later recognized to be 2011 ES4 by Pietro Sicoli, Italy. These new observations, added to the sample of the 2011 ones, dramatically increased the accuracy of the orbit (now based on 9 years of data vs 4 days!) and we could calculate the details of the new close approach with high accuracy: 2 Sept. 2020, at 07:49 UTC (uncertainty < 1 minute), at about 1.48 millions of km (error < 1%), 12 times further than the previous nominal distance. To be clear: these latest details are in perfect agreement with the predictions done earlier, being well within them.

As we can see, the body was found three days after its close encounter with us, when it was already leaving: this reflects the position in the sky of the object. We personally observed it on 6 Sept., as the image above shows.

We must say: “thank you, 2011 ES4”, as it offered us the opportunity to remember the fascinating things behind this kind of events and to learn a lot.