Two space stations at a glance from a legendary place: the ISS and the Tianhe-1 captured from Rome – 20 May 2021.

Last night I had the unusual opportunity to image both the International Space Station (ISS) and the Chinese Tianhe-1 space station (its main core) together in the sky from Rome. I captured them from a legendary, ancient place, the Circus Maximus: this made the experience just unique. 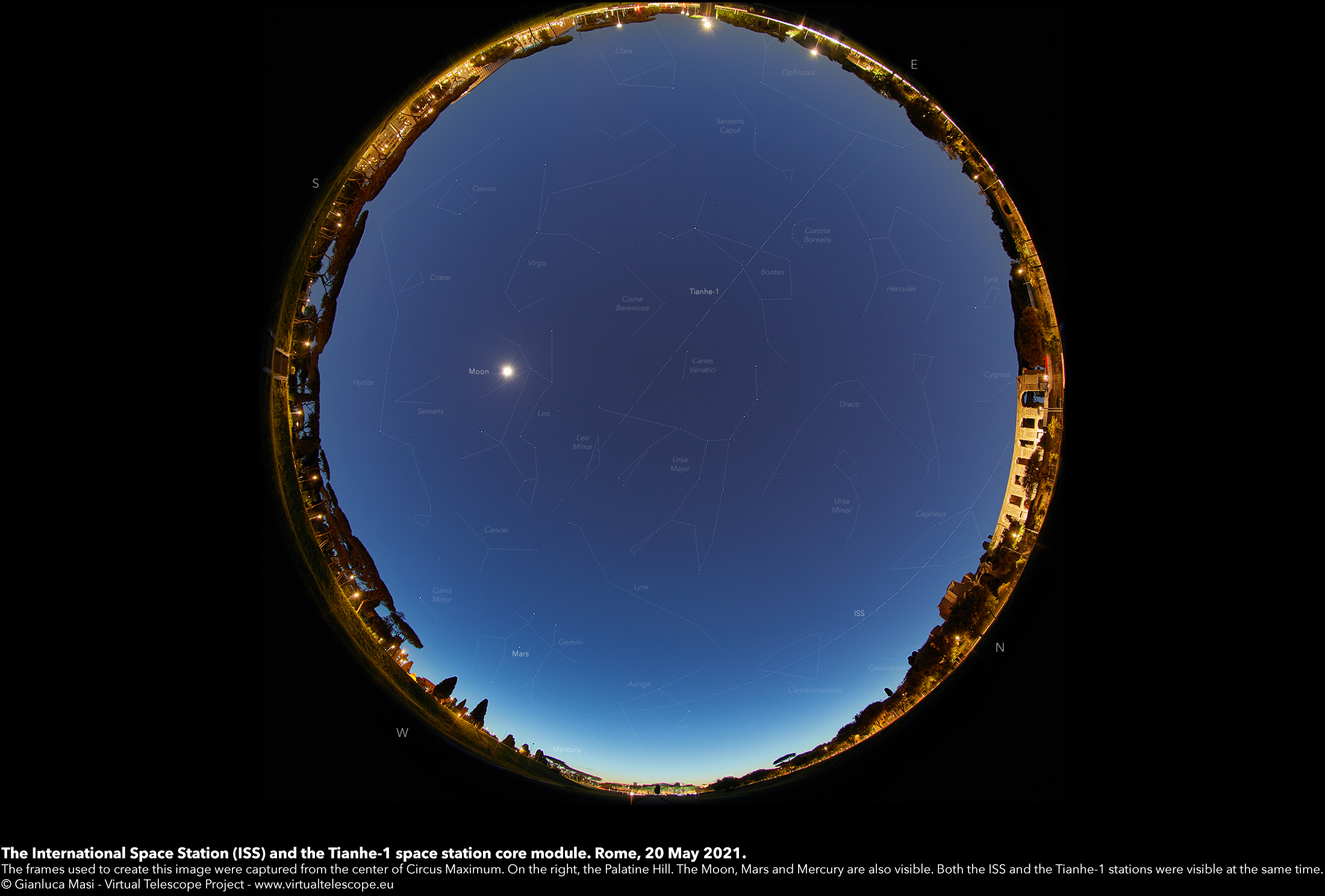 The International Space Station (ISS) and the Chinese Tianhe-1 core module fly above the Circus Maximus in Rome. 20 May 2021.

Recently, you have heard for sure about the Chinese rocket re-entering our atmosphere. It placed into orbit the first (the core) module of the new Tianhe-1 Chinese space station. China already owned the Tiangong-1 and Tiangong-2 space stations, now decommissioned.

There is another, very famous space station around the Earth: it is the International Space Station (ISS) and likely you have seen it during one of its bright passes across the stars. With the Chinese Tianhe-1 one now in orbit, you have two of them to look for. And what about seeing both at the same time?

Intrigued by this possibility, I started looking for such an opportunity from Rome, Italy, and discovered I had one just a couple of days away, on 20 May 2021 evening, soon after sunset. Checking the prediction, I understood I needed to access the entire sky to fully exploit this precious opportunity.

Now that the pandemic is hitting us less, I decided to go out – of course, dressing a protecting mask – and image this superb event from a special place of the Eternal City, hopefully adding its charme and cultural value. I had to find it. After some intense brainstorming I selected the Circus Maximus as the location of my imaging session.

Circus Maximus is a unique place: with a documented history of almost 2500 years, it was the largest venue for public games in Antiquity and it is rich of astronomical connections. Furthermore, from the Circus you can see the Palatine Hill, too, adding beauty to beauty.

I reached the place well in advance, to have the time to carefully setting up my imaging gear: a Canon 5DmIV DSLR body and a Canon EF 8-15mm f/4 L USM Fisheye, both on a heavy duty tripod. I loved the idea to capture the whole sky, framed by the borders of the Circus Maximus and the Palatine Hill.

The ISS was the first object to appear and I started imaging as soon as it was above the horizon, accordingly to my data. It approached me from the Western horizon, with the sky background very bright (the Sun was 8 degrees only below the W horizon); one minute later or so, the Tianhe-1 appeared, too. It was truly amazing to spot both the stations at the same time, really. The ISS was not at its brightest possibilities, but still offered a great view, while the Tianhe-1 was bright, too, more than I expected: it was a stunning view from the Circus Maximus and I hope the image above will bring my experience to you.

In the image, I took the liberty to draw the constellation’s lines and label the Moon, Mercury and Mars, in addition to the ISS and the Tianhe-1 space stations.

Now, I’m looking forward to future passes with both the stations at their highest/brightest! What about giving it a try yourself?