Double Asteroid Redirection Test (DART) impacted on Didymos/Dimorphos… and it was a huge show!

It is hard to comment the stunning experience we had last night: we saw in real-time, with our very own eyes, the effects of DART slamming into its target asteroid Didymos, making it much brighter, with a huge cloud of debris. 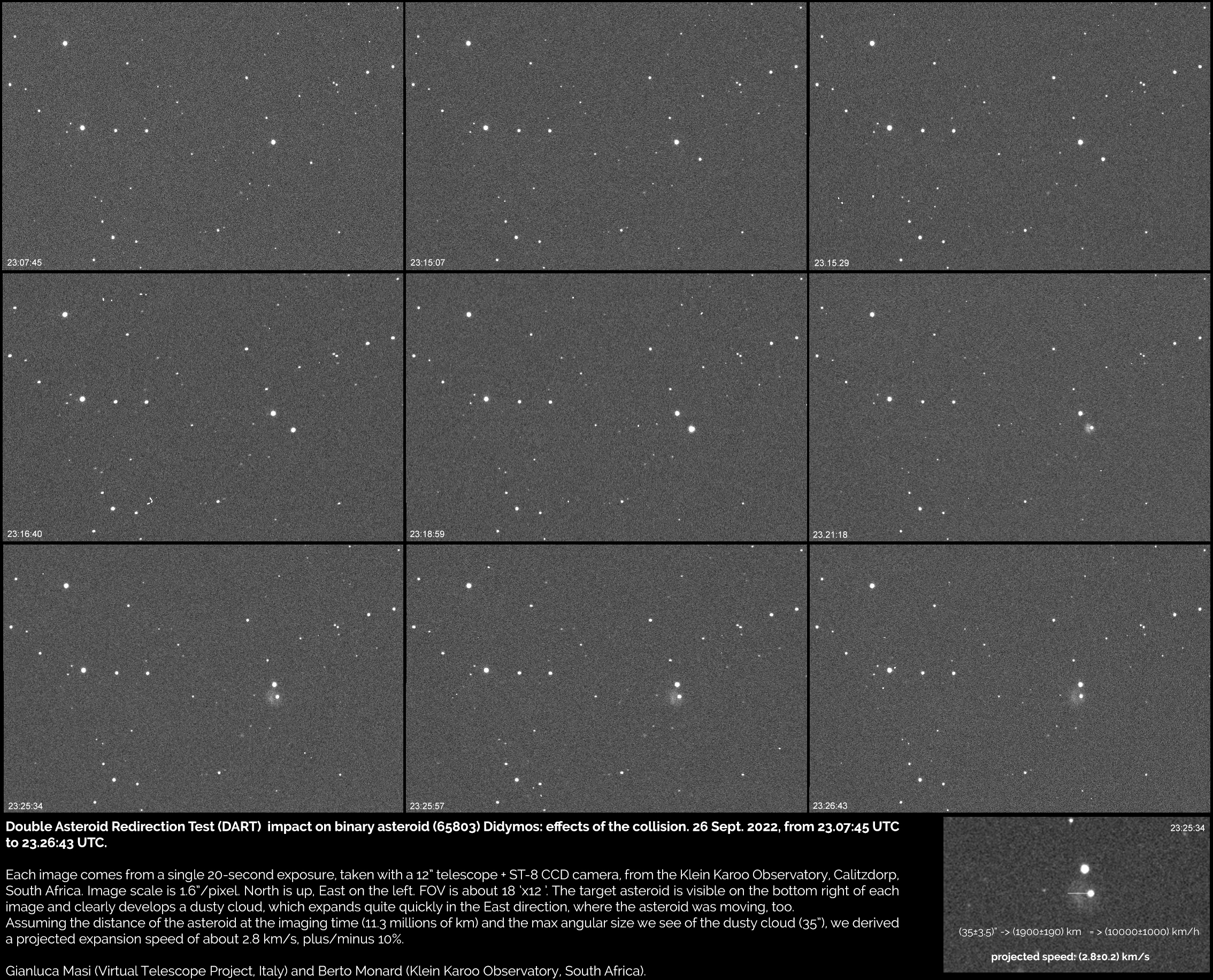 DART impact on Dimorphos: a panel summarising our observations, with clear evolution of the target asteroid.

We have been waiting for 10 months, since DART probe was launched last Nov. and it happened, at last. The crash of the Nasa’s probe on Dimorphos, the small companion of the potentially hazardous asteroid (65803) Didymos, to test a kinetic impactor to deflect an asteroid, was a huge show as seen through a telescope, something I’ve been considering possible for months, to the point I wanted to offer to everyone on the planet the opportunity to have a look. And my intuition has proven to be right, considering what we saw last night.

To track asteroid Didymos at the time of the impact, an important collaboration was started between the Virtual Telescope Project and the Klein Karoo Observatory in Calitzdorp, South Africa, managed by the internationally respected amateur astronomer Berto Monard, a good friend of mine. From there, the asteroid was visible at its best around the nominal impact time: 26 Sept. 2022, 23:14 UTC. We scheduled a live feed accordingly: we tested several things the days before and we were ready… but clouds were, too… so last night we were very close to give it up.

But Berto suggested to wait until the very last minute, as there were a few chances to have holes in the clouds. He decided to open his observatory and we started to check pointing and focusing of the telescope. Less than 10 minutes before the impact, Berto’s 12” telescope was on the right spot of the sky and we could see stars and asteroid Didymos! At the speed of light, we decided to open the live feed, with a lot of people waiting for us. Since then, what happened simply made history.

Images were of good quality, something hard to believe, considering it was even raining a couple of hours earlier. We were truly happy for the gift of a reasonable weather and excited for what we were hopefully going to see, with thousands of people worldwide joining our feed. The time of nominal impact (23:14 UTC) arrived, but we had to wait for 38 seconds more to check our “all or nothing” fate: Didymos was about 11.3 millions of km away and it took 38 seconds to the light to cover that distance.

But that delay was rewarded: we immediately noticed on the monitor a significant increase in brightness of asteroid (65803) Didymos! Pure joy. Was that right or just an impression? Our images collected light for 20 seconds each, plus 3 seconds to read out the camera, so the next image arrived about 25 seconds later and… yes: Didymos was really getting brighter and brighter as an effect of the impact, because of the plume of dust released by the body after DART crashed on it.

But we had much more than that: soon, we started seeing a clear dusty cloud around the asteroid, quickly expanding and showing features. We had about 20 minutes of good sky conditions before clouds came back, heavily affecting the view. At that point, we closed the live feed, but Berto continued to take images, even if the weather never improved.

Using the best images collected, we managed to create the animation below:

Asteroid (65803) Didymos around the impact time of DART: clear brightening and evolution of a dusty envelope are visible.

We also estimated the projected, expansion speed of the dust cloud, about 2.8 km/s (see the image at the beginning of this post for details).

We also wanted to study the brightness of the target, even if the presence of an expanding cloud of dust made things complicated. Despite this, we could create this very interesting plot. 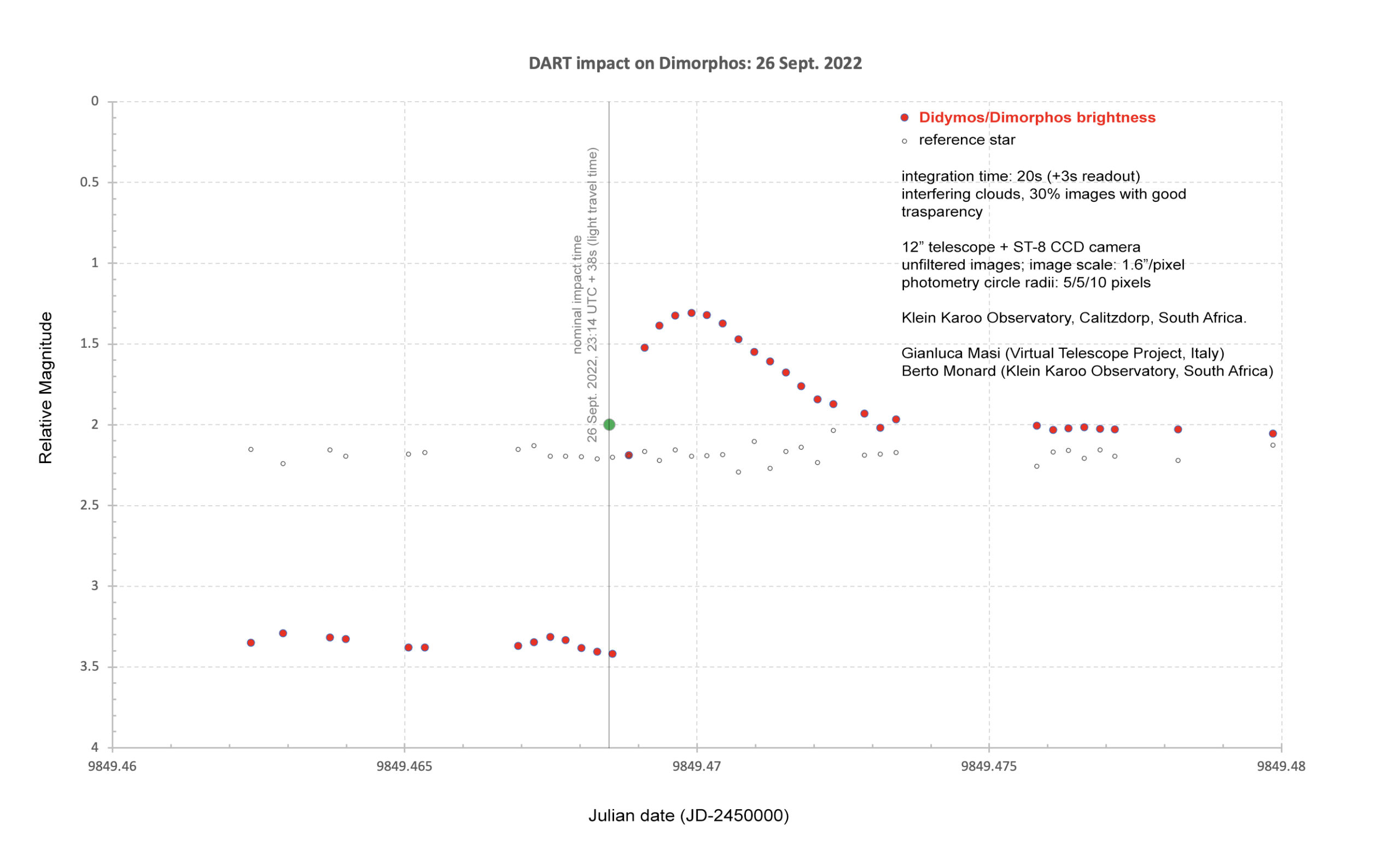 Lighcurve of (65803) Didymus around the time of DART impact.

If you want to see the recording of our live feed, please find it below:

I hope the images and media above will bring to you the excitement for such a historic event. I want to personally want to thank Berto Monard for very promptly accepting my proposal to cooperate on this and all of you for following us in such a truly epic result!