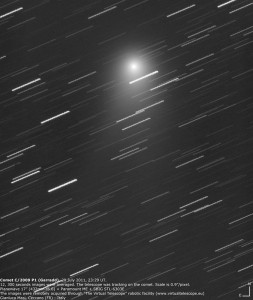 After quite a long absence, an interesting comet was coming again, its name being C/2009 P1 (Garradd). Discovered by the australian astronomer Gordon J. Garradd on 13 aug 2009, this comet will be interestingly bright over the next few months.

The Virtual Telescope staff planned an exclusive online event, making possible for all to observe the comet in real time thanks to our cutting edge technologies.

The event was in English and it was scheduled for 21 Sept. 2011, at 18:30 UT. After a fascinating introduction to the history and science of comets, comet Garradd was observed in real time, with our new, amazing telescope, with the live commentary from our acclaimed scientific staff.

A mosaic with two images was done, in order to cover both the objects, still having a nice resolution. They were captured with the PW17 unit, part of the Virtual Telescope Project. Both images used were integrated for one minute each.

The optical tube is installed on a Paramount ME mount. The CCD camera is a SBIG STL-6303E. The image scale is of 1.26 “/pixel.