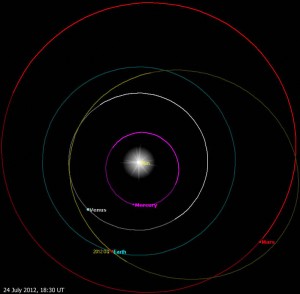 The Virtual Telescope team contributed to confirm its existence and their observations were included in the discovery circular (MPEC 2012-O13).

It turned out to be a Potentially Hazardous Asteroid (PHA) and it was going to reach a minimum distance from the Earth of about 3 millions of km. 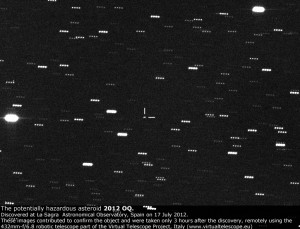 The potentially hazardous asteroid 2012 OQ seen at the Virtual Telescope

Such an interesting approach inspired another free, online session to track the asteroid in real-time with our many friends around the globe.

The event had an amazing exposure, thanks to the Italian press. 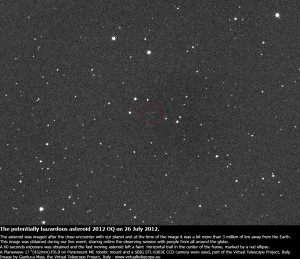 Asteroid 2012 OQ trailed in this image, obtained during the live event

Here it is an image coming from the public session, clearly showing a trail after only 60 seconds of exposure. Of course, the telescope was tracking at the sidereal rate.

Then, the Planewave 17 was set to track the asteroid and make a breathtaking movie. See how 2012 OQ was flying across the stars!