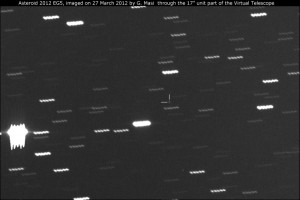 On 30 March 2012, the Virtual Telescope offered a live, exclusive event to show the passage of asteroid 2012 EG5 online.

While waiting for that session, a few nights earlier we managed to follow this minor planet, getting a few images.

At the event time, the asteroid was even closer, with a very fast apparent motion against the stars in the background.

Quite a spectacular view for the Virtual Telescope supporters, who tracked this intriguing object while approaching planet Earth. All this with the live commentary from Gianluca Masi, astrophysicist. 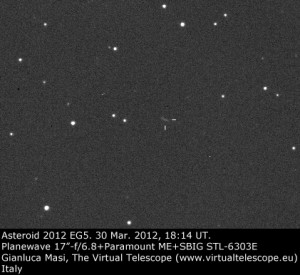 On March 30, while waiting for the public session to start, a few preliminary images were grabbed, clearly showing the asteroid as a trail after a few seconds exposure, because of its apparent fast motion. 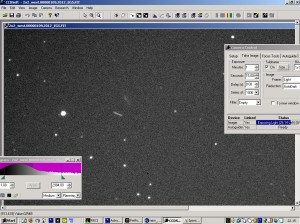 The CCD panel showing the asteroid like a trail

Finally, the live session started and 2012 EG5 amazed the public. On the left, there is a 90 sec exposure, clearly displaying a trail: that is the asteroid! The telescope was tracking the stars, so the peculiar motion of the minor planet made it showing this way.

During the event, a sequence of 60 images was obtained, with the telescope tracking the apparent motion of the asteroid. Images were collected between 19:36 and 19:57 UT. The movie is below.
[hana-flv-player video=’https://www.virtualtelescope.eu/2012eg5_30mar2012.flv’/ width=”640″
height=”480″
/]
The full resolution version of the video is available here (10Mb animation).