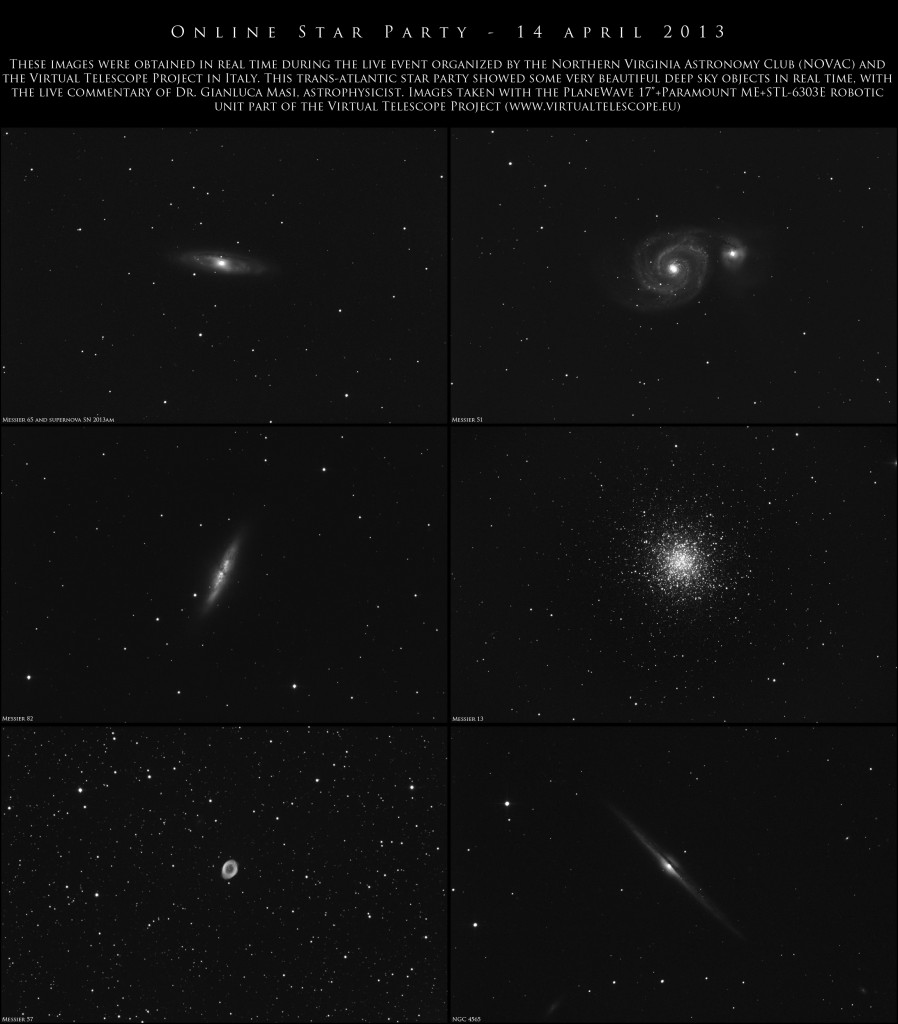 Last 14 April, the Virtual Telescope hosted an online star party, organized by the Northern Virginia Astronomy Club (NOVAC). It was also opened to all those willing to join it online. While the telescope and the “driver” (dr. Gianluca Masi, astrophysicist at Virtual Telescope Project) were in Italy, the NOVAC friends enjoyed online the real-time images taken by the PlaneWave 17 robotic unit and commented by dr. Masi.

The sky was just amazing, very clear and steady and images turned out to be unforgettable. The truly outstanding performance of the system made possible to capture great views of some of the most beautiful deep sky gems in the Spring, northern skies.

Participants reached a distance of 40 millions or so of light years, spying the wonderful galaxy Messier 65, these days hosting a bonus: a supernova (SN 2013am), discovered a few weeks earlier.

Then, it was time to visit Messier 51, the “Whirlpool”: always a breathtaking view, with the perfection of the spiral design and the presence of its companion. M 51 is one of the most beautiful galaxies out there.

Then, a quick leap into Ursa Major, to see the irregular galaxy Messier 82, the “cigar”. Plenty of details in its intrigued profile, with a lot of dust and fine structures, exalting the image resolution and quality of the vision.

Back and forth into deep space, we slewed the scope to a true gem: the bright, astonishing globular cluster in Hercules, Messier 13. Just a couple of seconds of exposure gave a clear evidence of its richness. A deeper view showed literally countless stars, one of the greatest hits of the season.

Heading east, we entered the Summer skies with a look at Messier 57, wondering about the destiny of our own Sun. That dying star showed very easily, as well as the far galaxy apparently sharing the same area of the sky, but incredibly farthest.

The final destination was the NGC 4565, a venerable edge-on spiral, like a blade of light with its prominent bulge.

A great adventure, as always when the sky is involved. We wish to thank all the friends of the Northern Virginia Astronomy Club (NOVAC), in particular David Werth and Phil Wherry, for considering the Virtual Telescope for their great and very successful event!