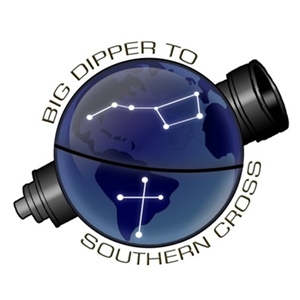 Many of us never get a chance to observe the night sky from our opposite hemisphere. Now Astronomers Without Borders and its partners, the Virtual Telescope and the Las Cumbres Observatory, are making it possible for everyone to observe the Northern and Southern Hemisphere skies online! The last time AWB hosted “Big Dipper to Southern Cross”, in 2010, it was a big hit: more than 7,000 people from 80 countries participated in one of AWB’s most successful online observing events.

This year’s Northern Hemisphere session will be held July 27, 2013 from 22:45 until 24:45 UT. Observers will use the Virtual Telescope in Italy for a look at the Hercules cluster, the Ring Nebula, and other gems of the northern sky. The session will be hosted by Gianluca Masi, the scientific curator of the Planetarium of Rome and founder of the Virtual Telescope Project. Participants around the world will be able to log in to the session (don’t forget to translate for your local time!) and view the skies through the project’s 17-inch Planewave Corrected Dall-Kirkham Astrograph telescope.

The Southern Hemisphere observing session will be held August 3, 2013 from 21:00 until 23:00 UT. The session will use the telescope at the Sutherland Observatory in South Africa, via the Las Cumbres Observatory Global Telescope Network, to look at globular cluster 47 Tucanae and other exciting targets. The Milky Way will be right overhead! Edward Gomez, education director for the Global Telescope Network, and Rob Hollow, education officer at CSIRO Astronomy and Space Science in Sydney, Australia will be the hosts of the session. Log in here on the above date for a look through the network’s specially designed one-meter scopes. Liam Kennedy, of imageBEAM is the Hangout Producer for this event.

Head over to BDSC event page for more details. Enjoy your trip to another hemisphere and see once again how we are truly one people, one sky!