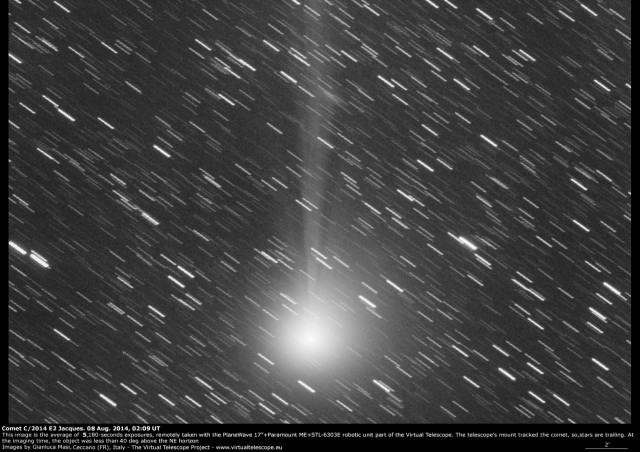 Continuing the follow-up of comet C/2014 E2 Jacques, last morning we observed it again, finding it was showing a completely different aspect than the previous nights. This comet is really surprising, with its details rich ion tail.

The image above comes from the average of 5, 180-seconds exposures, remotely taken with the  17″ robotic unit part of the Virtual Telescope. The telescope’s mount tracked the apparent motion of the comet. At the imaging time, the comet was at less than 40 degrees above the horizon, but the sky was very clear and the ion tail is amazingly well visible, with many  intriguing details. Comparing this image with the one from the previous morning, the rapid changes of this comet are really apparent.

Using 21, 180-seconds images, taken back to back with the same instrument, it was possible to create an amazing movie, showing how the plasma tail evolves in matter of minutes. This movie covers from 01:39 to 02:43 UT, 8 Aug. 2014. Note: at the beginning of the movie there is a galaxy behind the tail, then the comet moves away.

a satellite trail is also visible