There are so many amazing things up there in the sky, able to take your breath away with their timeless beauty. But the Cosmos has some very special occasions where it overwhelms us with awe, elegance and feeling of eternity.

The first days of this October provided one of those circumstances, when the Moon, going to embrace the Sun at the end of its monthly, tireless journey, was ready to show in the same spot of heaven with Venus, Mars and Jupiter. To say it all, there was also Mercury there, but lost in the light of sunrise, not easy to catch.

At Virtual Telescope I planned to capture that sight from Rome on 9 Oct., early in the morning, when the Moon was in conjunction with Venus, but weather was against me. Same fate the following morning.

The weather was heavily rainy the whole 10 Oct., with several meteo-alerts over Italy. But, spotting satellites images, I concluded there was a fair chance to have some clear skies for the morning of 11 Oct.. I  prepared all my imaging setup and reached a famous place in Rome from where the eastern horizon is beautifully accessible: the “Gianicolo” (Janiculum), providing a legendary sight above Roman’s roofs. 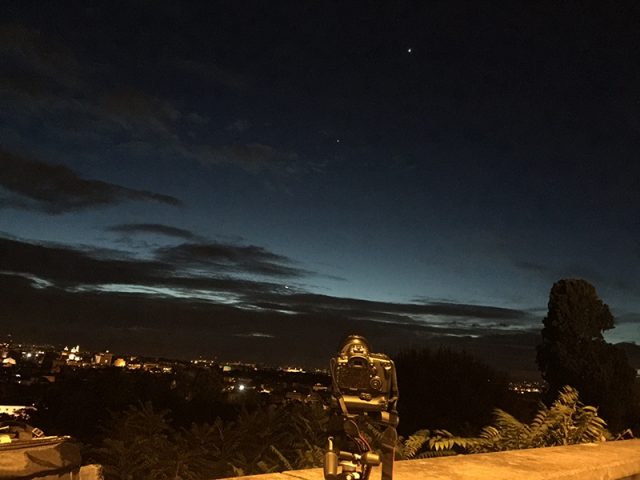 I was lucky, I must say: clouds opened in the east direction, where I had to look and Venus popped up with its very intense light, playing with the residual clouds in that area. Meanwhile. Orion and its dogs where bright on the south. 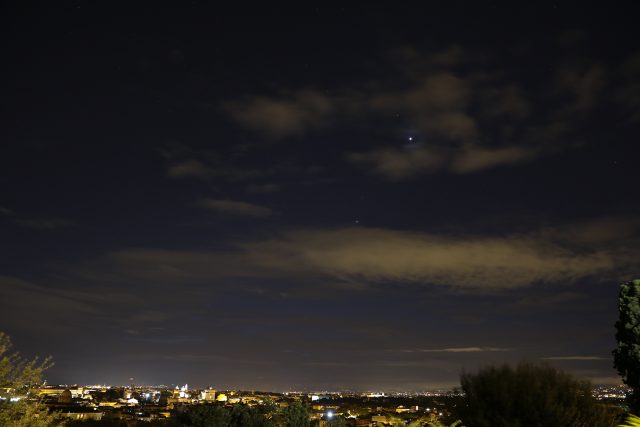 11 Oct. 2015: Venus, Jupiter and Mars  above the Roman skyline at dawn. Regulus and other stars of Leo are around them.

It was a very encouraging start, even if the residual clouds closer to the horizon was a severe obstacle against the Moon (expected as an extremely sharp crescent) and the subtle planet Mercury. Considering the previous 48 hours, though, it was already a miracle I could see at least that.

Less than 15 minutes later, my brave attempt was awarded with a stunning Moon emerging from the clouds, with a memorable Earthshine: with an age of 27.7 days and a phase of  2.96% it was such a blade of light! 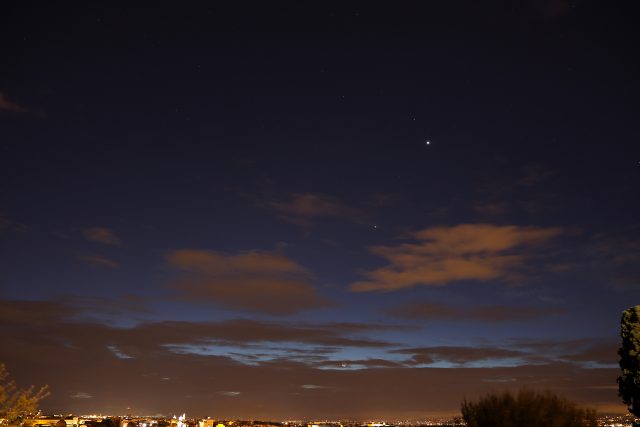 The Moon adds to the show with its precious Earthshine; the Leo constellations is also visible

The sight included almost the whole Leo constellation, in particular its mane. I was truly amazed, as I was honestly thinking I was going to miss at least the Moon, because of those tick clouds, but fortune was with me. At least, to some dregree, as I still was missing a planet for my “poker”: Mercury.

Looking at the clouds, I saw their motion could possibly help me locating Mercury. It was important to stay concentrated. 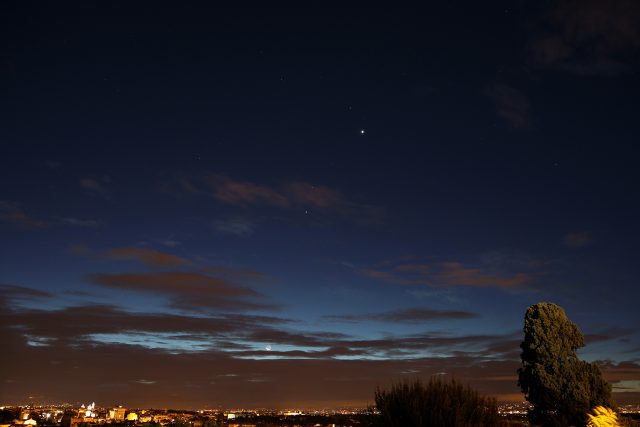 Finally, the Moon and its Earthshine showed perfectly among the clouds

And yes: I was on the right way, that was my thought when the entire lunar disk emerged among the clouds, in a clear strip of blue sky: the daylight was increasing and increasing, so it was my race against time to see Mercury or not.

Three minutes later, I made something unique in my astronomical life. I captured also Mercury, the innermost planet of our Solar System, in good company of the lunar crescent and the other three planets: four planets plus the Moon at a glance, a speechless vision I will remember forever. Below the celestial scenery, you can recognize some of the most famous monuments in Rome, as the Colosseum, “Altare della Patria“, the “Campidoglio” building and much more. 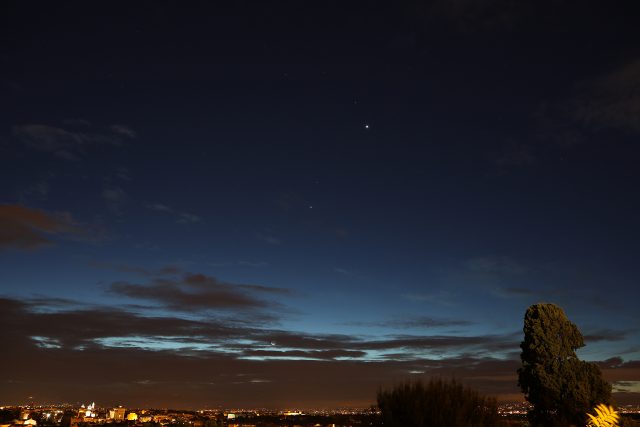 In a beautiful blue sky, Venus, Regulus, Mars, Jupiter, the Moon and Mercury are making a unique apparition above the Roman roofs, as seen from Gianicolo, in Rome

Honestly, it was like a dream to have four of the five planets visible by naked eye in the same spot of the sky; the vision was so beautiful and somewhat unbelievable that it took to me some time to return to real life, helped by a couple of runners crossing the square where I was. I would have to thank them, as coming back to Earth that way, I decided to take my other camera with its powerful optics (canon Eos 70D with 70-200-f/2.8 lens) to get a close-up of the Moon pairing with Mercury, something I do not remember to have seen earlier so well, or at least with such an elegant Moon. 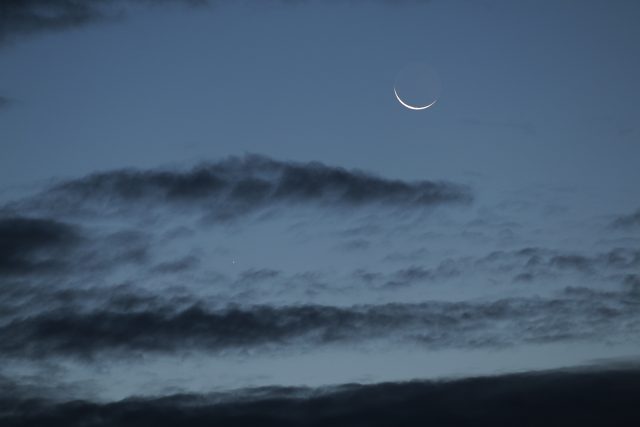 The Moon, with its sharp crescent and Earthshine, is pairing with planet Mercury

So, after 48 hours of rain, my brave attempt to go out in the field and grab the eternal beauty of the event was awarded with these incredibly lucky results. I was honestly tired, after 24 hours with no sleep, lot of work and and decided to drive home. I disassembled my setup, storing it carefully in my bags, then took the direction of my car, 50 meters far. 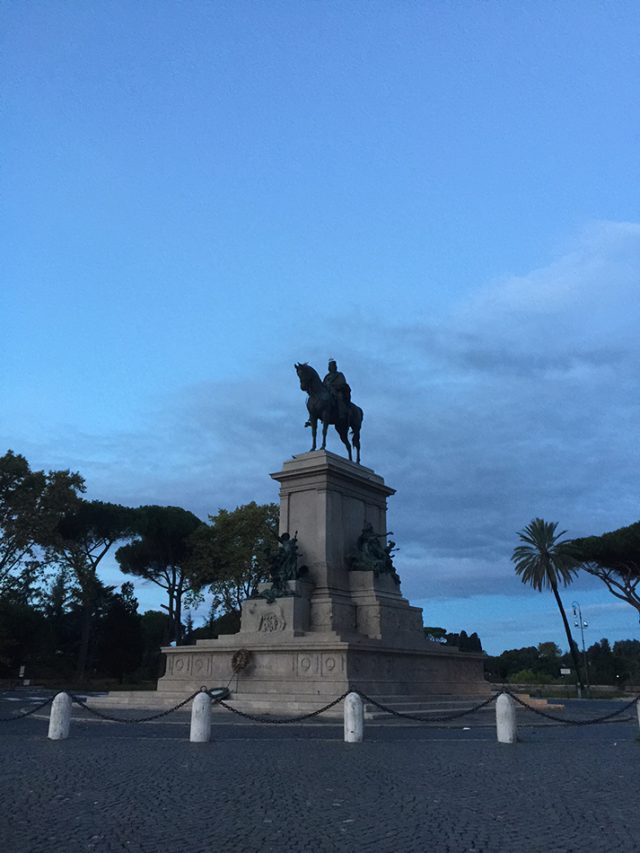 In that very moment, I saw the famous monument to Giuseppe Garibaldi, one of the Heroes and fathers of my Country and realized that, after all, he had been there with me, staring at that celestial glory. What an exceptional colleague I have had this time!