The Virtual Telescope Project showed to the world the long awaited fly-by of the potentially hazardous asteroid (3122) Florence. Our live feed was featured by many very important international media, with a resulting audience of more than one hundred thousand viewers. 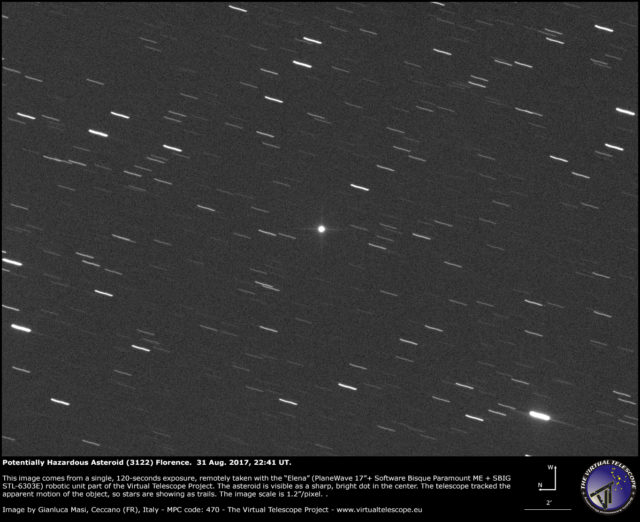 For sure, asteroids are among the most fascinating astronomical objects, from the point of view of the public. Every time one of them passes relatively close, people out there wonder if it will be a safe close encounter, what would happen in case of an impact and how the asteroid looks like. These are unique opportunities to share with the non-astronomers our knowledge about these objects, their meaning and the connected science and opportunities.

At Virtual Telescope we try to cover and share live the most spectacular asteroid close approaches and every time these online events result in a big success… sometimes an epic one.

That was the case of our live feed covering the relatively close approach of (3122) Florence. This 4.5km large, potentially hazardous asteroid captured the attention of the public, also because it was going to be visible through modest instruments, something quite rare. Its minimum distance from us was 7 millions of km, almost 20 times farthest than our Moon, a distance you would never say to be short, though (3122) Florence was the largest asteroid ever coming that close since we discovered the class of near-Earth objects in 1898.

We could not miss this opportunity, so we organized a live, online observing session, scheduled for 31 Aug. Our live event was announced by many important media: CNN, space.com, Sky & Telescope, EarthSky, Universe Today and many more.

While waiting for that big show, we started imaging (3122) Florence a few nights earlier, collecting amazing stuff, including this breath-taking video, which turned out to be a nice hit on youtube:

Aug. 31 arrived and we were very excited to show this asteroid to the world. The sky was not perfect at the beginning of the night, causing us some concern: we could see tens of thousands of people waiting for our live feed, so we were finally happy when the clouds moved away, leaving us a nice, starry night.

Below, you will find the podcast, covering the entire live feed. More than 100,000 individuals from every part of the globe enjoyed with us this apparition of (3122) Florence.

As with all the great encounters, it was sad to close our window on this object. But we had a lot of fun and we could make a lot of people out there happy to look at Florence, too, so we are already looking forward to our next online events!

PS: (3122) Florence had a nice gift for us! Before leaving, it unveiled to the curious eyes of the astronomers the existence of two small satellites, becoming the third near-Earth asteroid hosting more than one satellite.

Back to the “podcast” page