Next 31 Jan., the Supermoon show will be back in the sky, but this time it will be very special. In fact, it will be also a so-called “Blue Moon”, as some people traditionally call the 2nd full Moon in a given month, although this time the Moon will truly dress a very elegant, red color. On 31 Jan., we will have a wonderful total lunar eclipse, too. 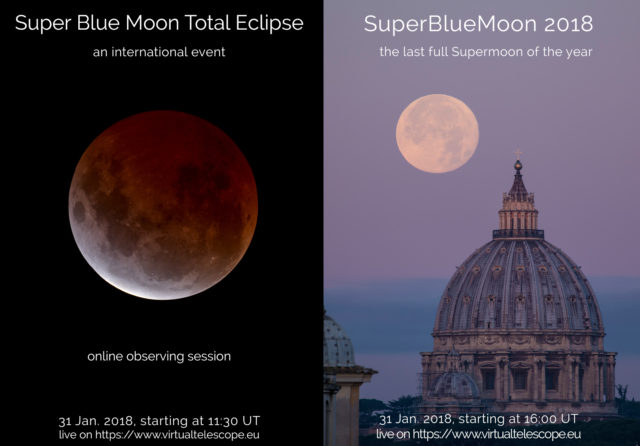 Next Supermoon will close a cycle of three similar events, which started on 3 Dec. 2017 and included the New Year’s full Moon, earlier this month. Our satellite will reach its minimum distance from the Earth (perigee) next 30 Jan., at 09:55 UTC, when it will be at 358.994  km from us (compared to an average distance of about 384.000 km); 27 hours later, the Moon will be also Full. Such a coincidence is now popularly referred to as “Supermoon“. The term itself is of no scientific value: astronomers prefer to call it perigee full Moon, but undoubtedly “Supermoon” is by far a much more charming name.

Both the full and the new Moon can be “super”, as long as they occur near the lunar perigee, that is, when our satellite is at its minimum distance from the Earth. The Moon moves around our planet along an elliptical orbit, so its distance from us is not constant, but varies between a minimum (perigee) and a maximum value (apogee). Of course, the new Moon is not visible in the sky, so only the full “Supermoon” can be observed (unless we have a solar eclipse during the new Supermoon, as in March 2016). 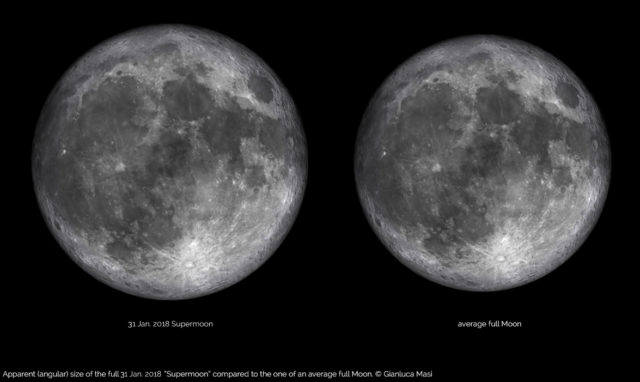 “The next full “Supermoon” will appear only 7% bigger and a bit brighter than an average full Moon, and will be the 2nd full Moon in the same month, a so-called “Blue Moon”, says Gianluca Masi, astrophysicist, scientific director of the Virtual Telescope Project. “There is an interval of about 29.5 days between two consecutive full Moons”, Masi adds, “so, it is not obvious to have two of them in the same month: the last time this happened was in July 2015, while in 2018 we will have such a “Blue Moon” twice, in January and March. But the 31 Jan. “Blue Moon”, in addition to be “super”, is also ready to wear an elegant red dress. 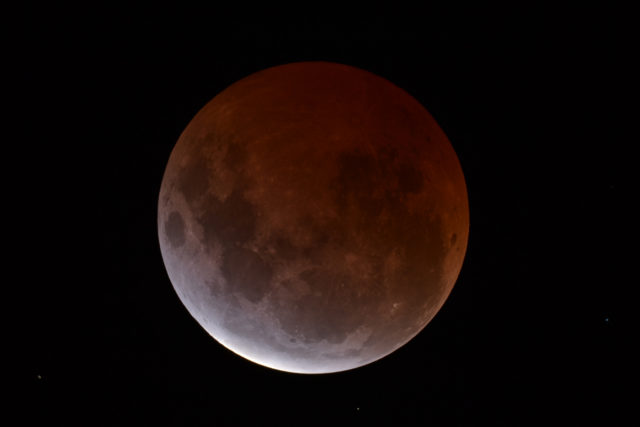 “Next 31 Jan., we will have a very spectacular total lunar eclipse, as our satellite will completely sink into the shadow of the Earth”, says Gianluca Masi, “and this eclipse will be particularly visible from Far East, Australia and Western USA”. People worldwide  will be able to join and see this amazing natural event in real-time, online, via the Virtual Telescope. “Thanks to our collaborators in Australia and USA”, Masi adds, “we will show this “Super Blue Moon” total eclipse to the world, actually dressing a stunning and elegant bronze color around the totality”. In that moment, our atmosphere will be directing to the Moon the red component of the solar light filtering throughout it. 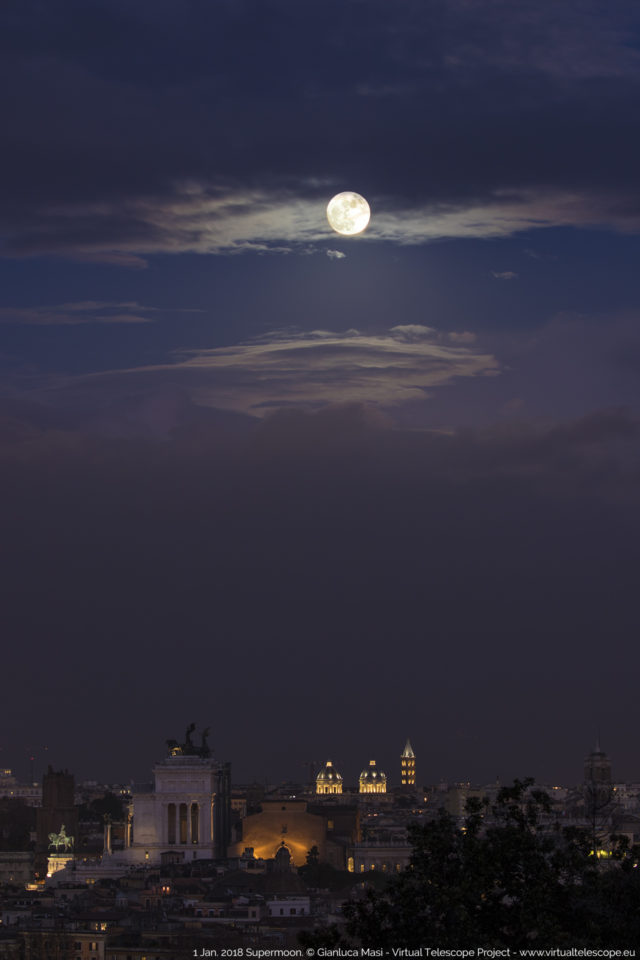 The 1 Jan. 2018 Supermoon shines above the “Altar of the Fatherland” in Rome

Both the live events will be commented by Gianluca Masi, astrophysicist and scientific director of the Virtual Telescope Project.

To conclude, next 31 January 2018, the Virtual Telescope Project will offer two live, online events, scheduled as below:

To join, simply enter at the date and times above the following website: https://www.virtualtelescope.eu.

This event is hosted as part of the partnership between the Virtuall Telescope Project and Tenagra Observatories, which is going to be formally announced soon.

Back to the “Upcoming events” page