All the five naked eye planets showed at a glance this June, at dawn, offering the rare opportunity to see all of them, in the same order of their increasing distance from the Sun. We managed to admire them from Rome, above the legendary skyline of the Eternal City. 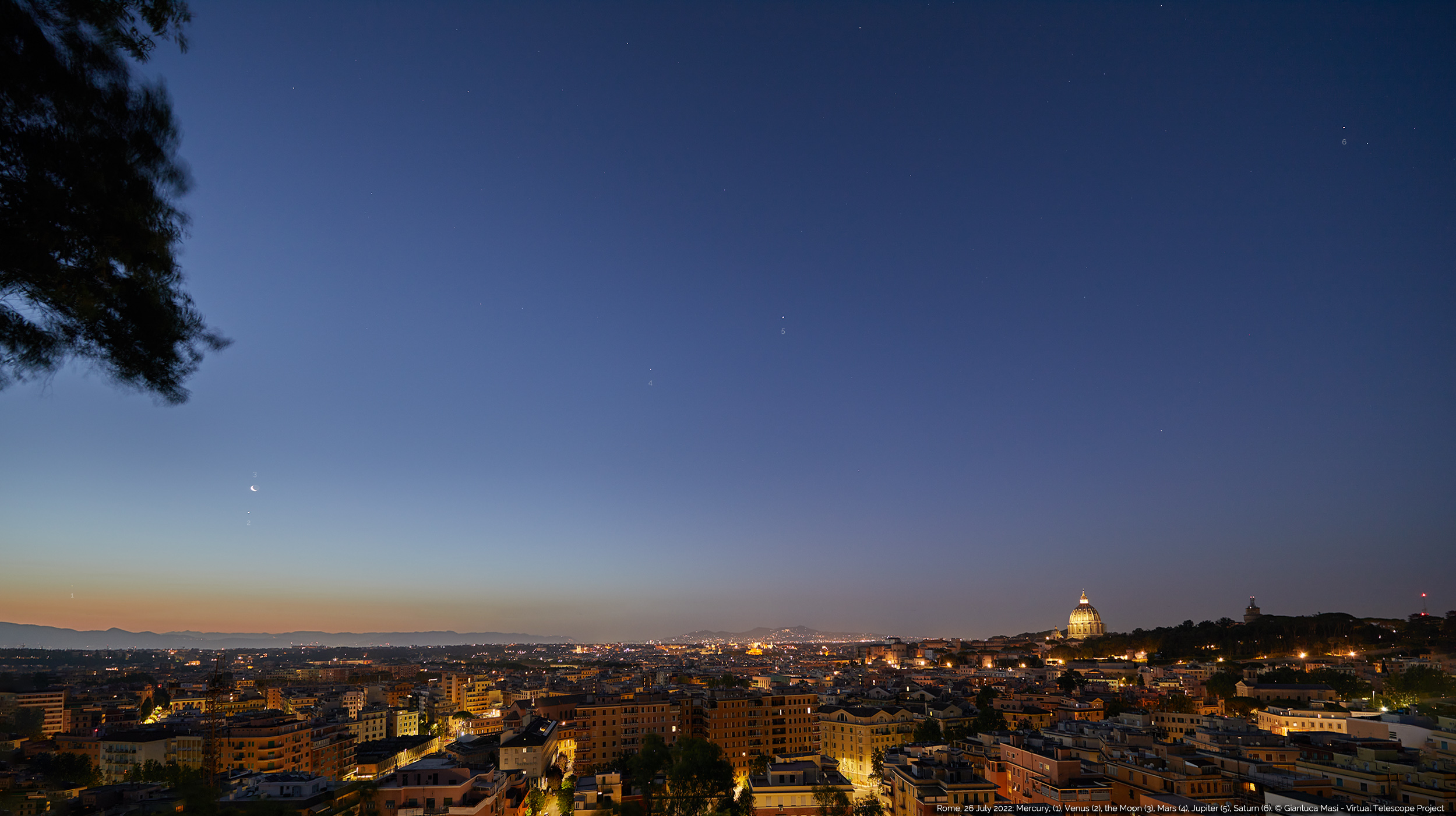 Mercury, Venus, Mars, Jupiter, Saturn and the Moon hang above the skyline of Rome, at dawn. 26 June 2022. (click on the image for the full-res version).

Observing all the five naked planets at a glance is an opportunity happening from time to time, but seeing them aligned accordingly to their increasing distance from the Sun is relatively rare. Last time, this happened in Dec. 2004 and after 18 years the show is back. I managed to cover the event from Rome, intrigued – as always – by the opportunity to couple the cosmic view with the beauty of Rome, Italy, where I live.

While imaging astronomical objects so bright is generally easy, in the case of such a parade there are some critical things to be considered: first, the planets – while aligned along the ecliptic, the projection in the sky of the Earth’s orbit – could cover many degrees in the sky (more than 100, in this case); furthermore, Mercury can be difficult to capture, being low above the horizon and showing in the brightest area of the sky at twilight.

For the reasons above I had to work hard to bring the result at home, mainly because the sky in Central Italy has been very hazy while the planets were showing at their best (thanks, Murphy!). But with some luck I could capture some awesome shots.

I managed to use one of my most precious lenses, a venerable CanonEF 11-24mm f/4L USM, offering an extremely wide, but rectilinear, field of view. Using it at 11 mm, I could capture all the planets in a single shot. This lens was coupled with a Canon 5D mark IV DSLR, both installed on a sturdy tripod.

On June 21, I tried to capture the parade from my home, but the sky was quite hazy and I missed Mercury, as you can see below. 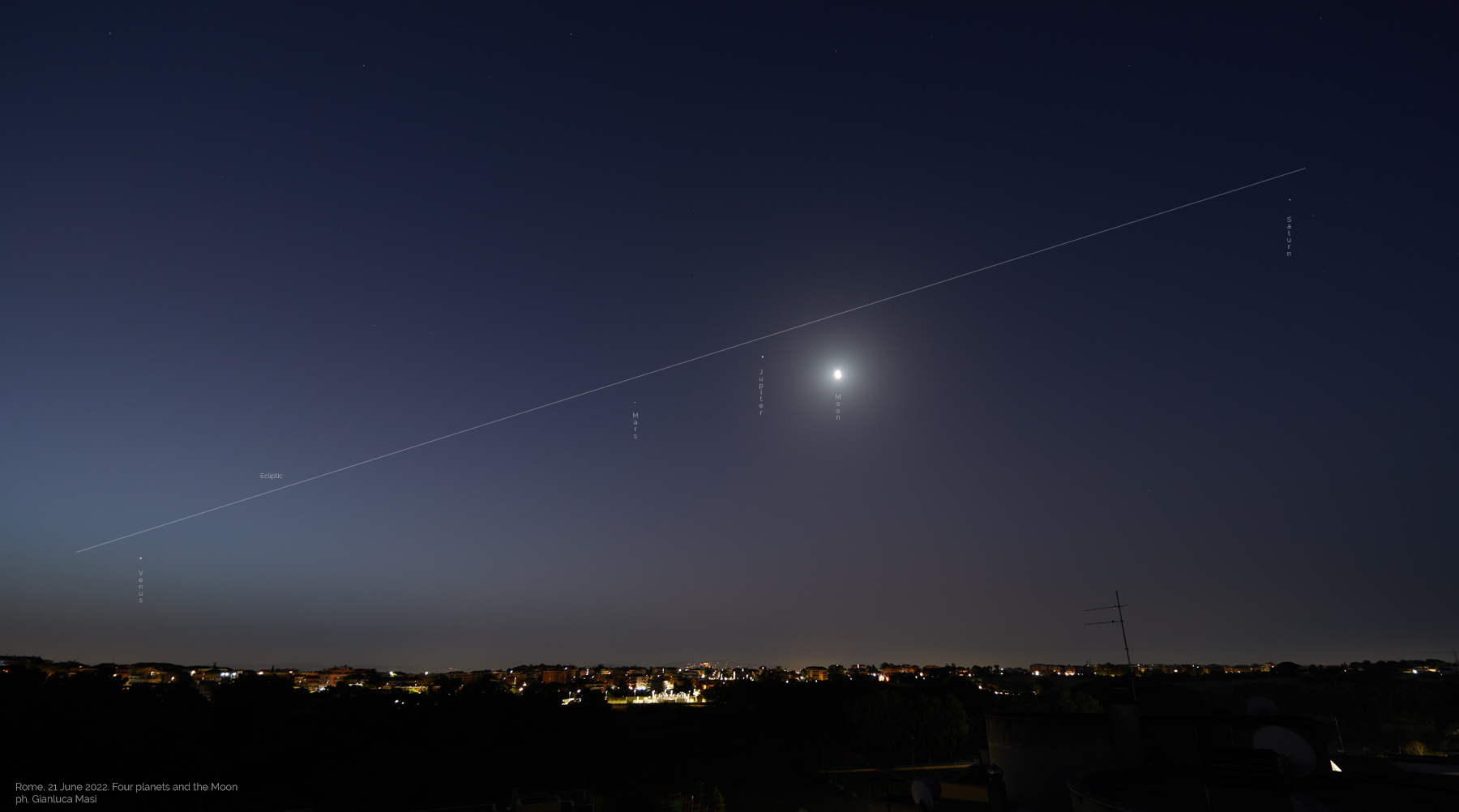 Venus, Mars, Jupiter and Saturn plus the Moon were showing in a very hazy sky. Mercury not visible. 21 June 2022.

After a few days of cloudy weather, the sky improved and on June 25 I managed to try again, this time adding the skyline of Rome. While forecasts were not ideal, I had luck and could capture all the five planets, plus the Moon. I hoped to capture the International Space Station, too, but I missed it because of the clouds. My best image is below. 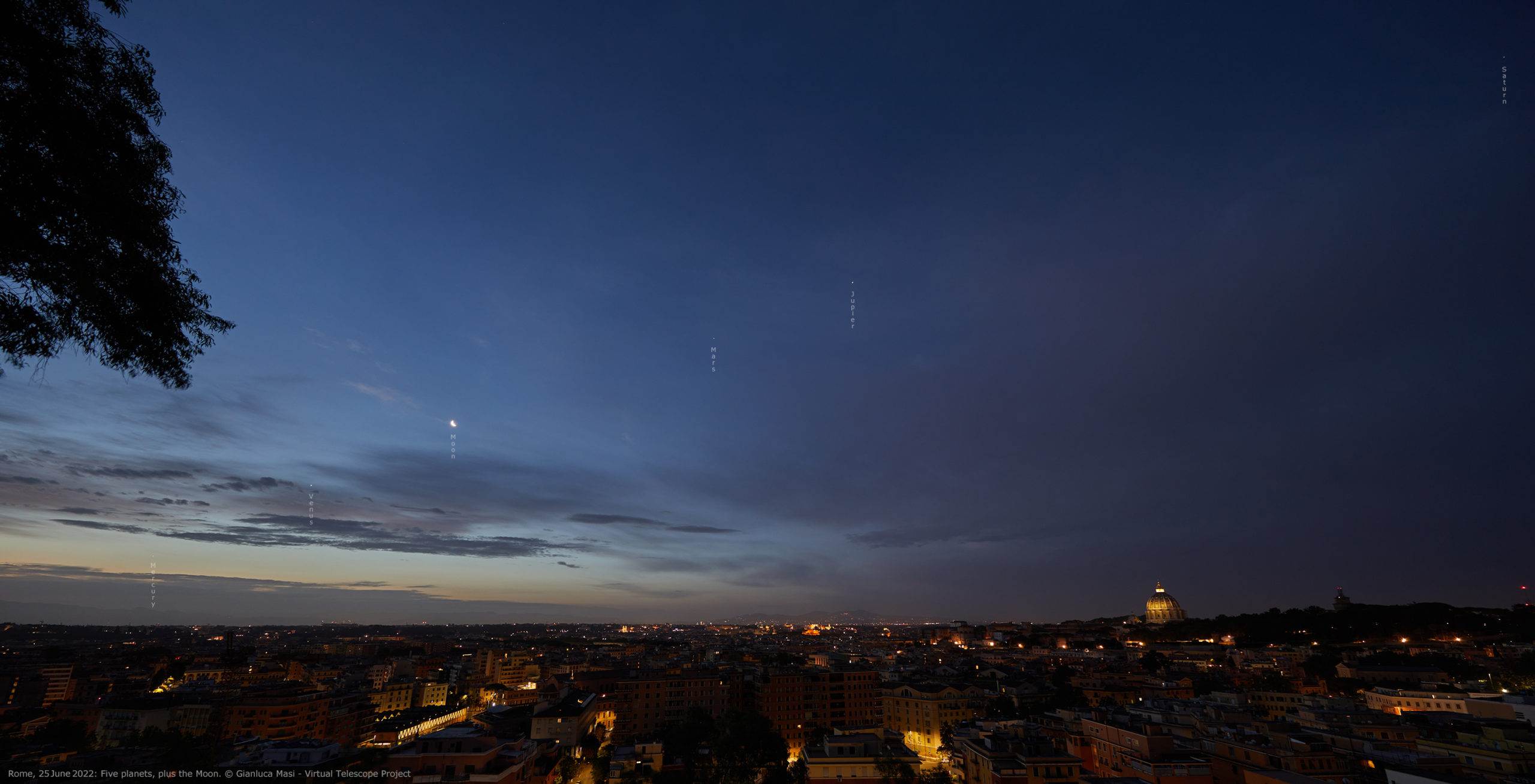 The five planets plus the Moon shine above Rome at dawn: the St. Peter’s Dome is clearly visible. 25 June 2022.

But the best opportunity for me was the following morning, 26 June 2022. The sky was very clear and I am very happy with the resulting images. While waiting for Mercury to rise, I had a great view of the Moon-Venus conjunction: my images also show the Pleiades, a nice bonus. 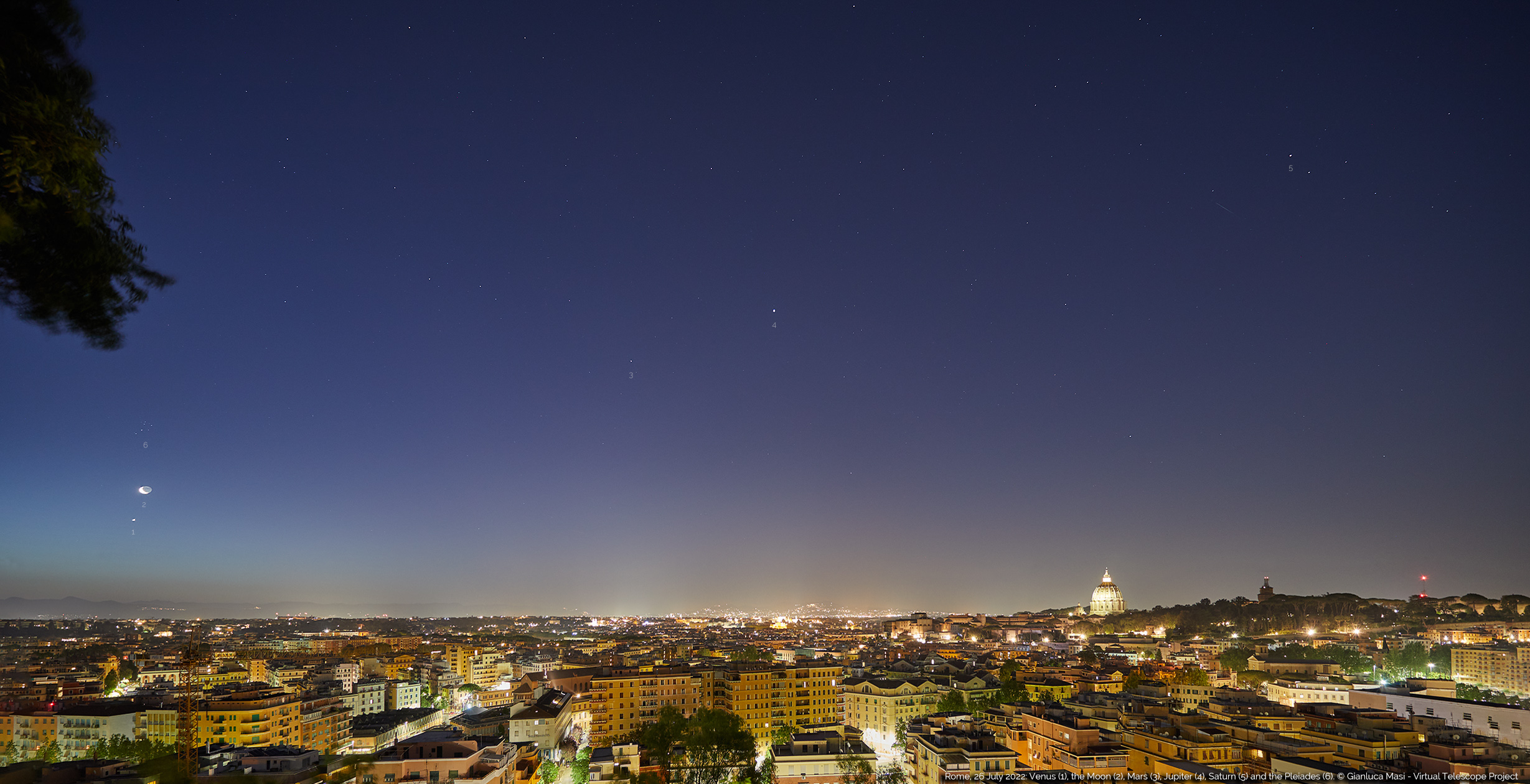 While waiting for Mercury to rise, four planets with the Moon hang above Rome. Pleiades are also visible, as well as St. Peter’s Dome. 26 June 2022.

At the end, I could image Mercury too and I’m happy to show again the image posted at the beginning, with the complete set of five, naked eye planets and the Moon.

Mercury, Venus, Mars, Jupiter, Saturn and the Moon hang above the skyline of Rome, at dawn. 26 June 2022.

All the images above are single shots, no compositions.

Next time such an alignment will happen, with planets showing in the same order (from Mercury to Saturn, as for their distance from the Sun) will be in 2041.