The nights of the five planets: images of a spectacular and rare astronomical show – 1-2 Feb. 2016. 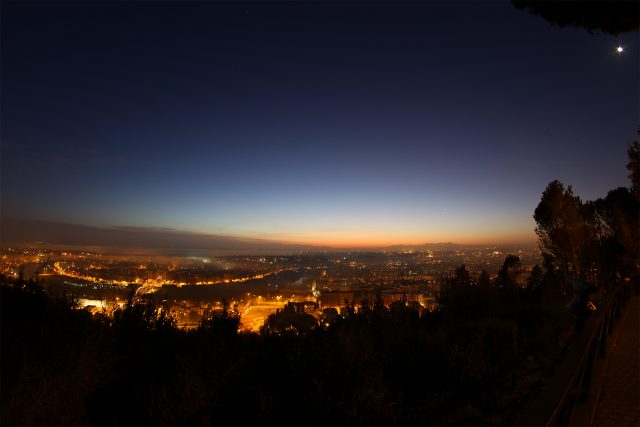 2 Feb. 2016: after imaging the full five-planets parade, it is time to go, while Venus and Mercury are sinking in the daylight, at dawn. On the right, the Moon and Saturn.

These nights (well, I should say these mornings!), the sky is offering an amazing and rare event: all the “historic” five, naked eye planets (Mercury, Venus, Mars, Jupiter and Saturn) are visible at a glance, at the same time in the sky. With the bonus of a waning Moon moving, night after night, from planet to planet. Oh, yes: including the Earth in the foreground, we count six planets!

As always in these cases, at Virtual Telescope we could not miss this stunning sight and the chance to share it with our friends. But, honestly, it has been an hard task: the sky has been cloudy for several nights in a row, once the event entered its climax and the risk was to loose Mercury, which visibility is not so long. But, unexpectedly, the sky improved just when the view was at its best.

So, on 1 Feb. 2016, at 05:30 am local time, I reached the  “Gianicolo” (Janiculum) hill, providing a nice terrace, beautifully facing east, with a great view ranging at least from NE to SE. I managed to set up my tripod and one of my DSLRs, this time equipped with a 8mm, fish eye lens: the extreme planets of this parade, Mercury and Jupiter, were almost 115 degrees apart!

I also had a 10×50 binocular, to personally enjoy the show. There were a few streetlamps making life harder than expected and after some tests I figured out which was the best place where to put my camera. As soon as Venus rose, around 05:40 am, it was an obvious unaided eye sight, despite there was some fog; about 30 minutes later, I spotted Mercury with the binos, soon later a certain view even with naked eyes.

It was time to grab a few images and the results were not disappointing. 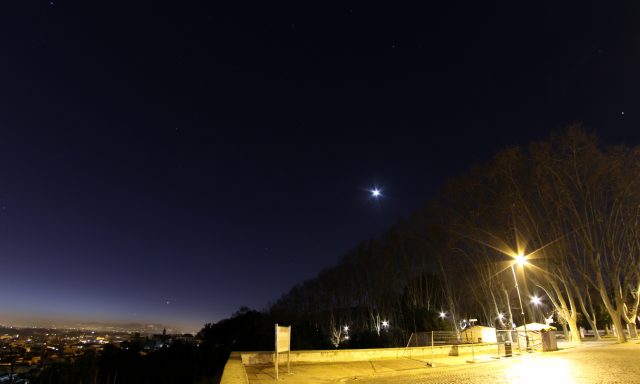 Mercury, Venus, Saturn, Mars and Jupiter, with the Moon, as showing at morning twilight above Rome – 1 Feb. 2016

The image above shows all the five planets, plus the Moon: from left to right, they are Mercury, Venus (the brightest one), Saturn (close to Antares in Scorpius), Mars (close to the Moon) and Jupiter (the bright object on the right border of the image). A map is available below to help identifying who is who (note: in the map the Moon is in a different position, as the chart was plotted for 31 Jan.). 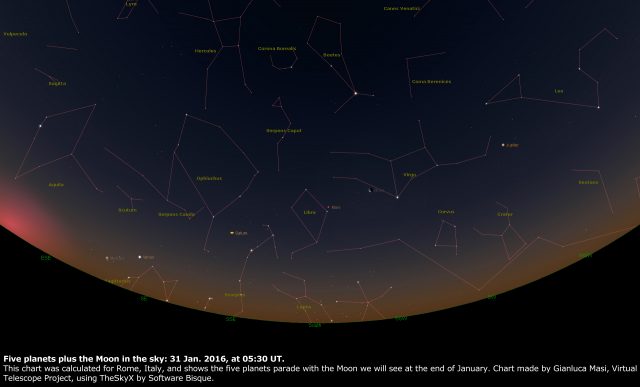 Before to leave, I managed to use a 55 mm lens to capture Mercury and Venus hanging on a beautiful, colored horizon. The view through the binocular, as well as by naked eye, was breathtaking! 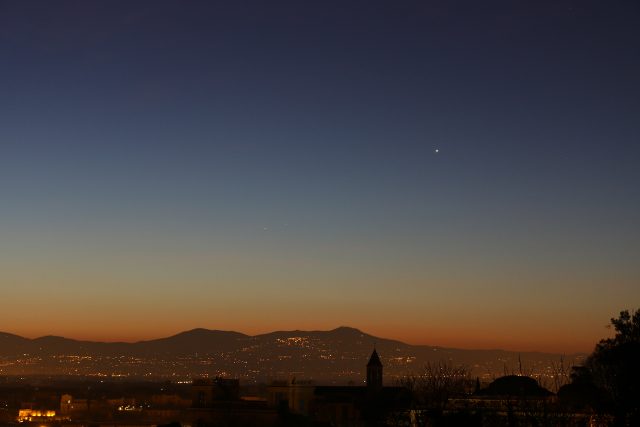 Venus and Mercury are gently brightening among wonderful colors, once the Sun is almost rising, above the Roman Castles – 1 Feb. 2016

The following morning, 2 Feb. 2016, the sky was good again and I wanted to exploit all the benefits of such an expected gift. At the same time, I did want to change the imaging location. I decided to go not far from where the historic “Monte Mario” astronomical observatory is located, the highest point of view above Rome, after all. While driving there, I noticed there were some cirrus clouds in the sky, so it was not certain I could image what I wanted.

While climbing Monte Mario, I stopped as there was a nice, bonus sight: from the way to the top, I could see the city sleeping in the fog, with the amazing St. Peter dome coming out from that sea of humidity. Look below and see: how could I miss this capture? 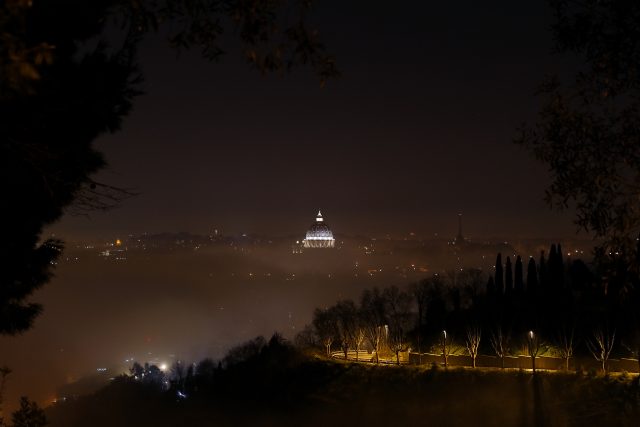 But I had to go and no fail the main mission! I reached the Monte Mario look-out and was impressed to see a large part of Rome lurking in the fog. I managed to set up my tripod and camera, once again equipped with the 8-mm fish eye lens. I had to work a lot to find a suitable position there, to avoid too much contamination by streetlamps nearby: very large FOV lenses are hard to use in the city lights at night! First of all, I wanted to capture Rome in  the fog, with Venus and Mercury shining above, using a 17mm-f2.8 lens. 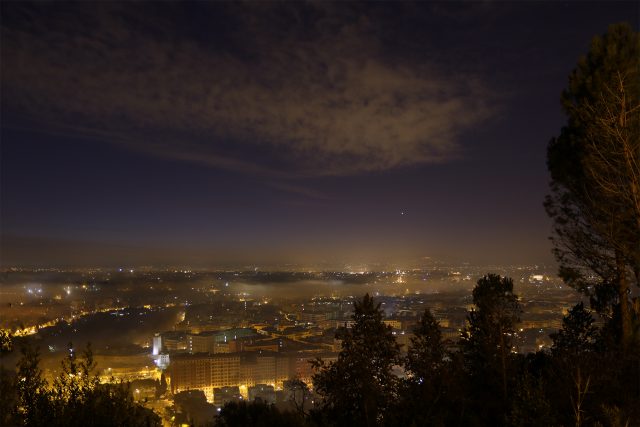 Venus and Mercury are rising, while Rome is full of fog and some clouds are dissolving in the sky – 2 Feb. 2016

Then, I managed to cover the whole planetary parade with the 8mm-f/3.5 fish-eye lens, as you can see below. 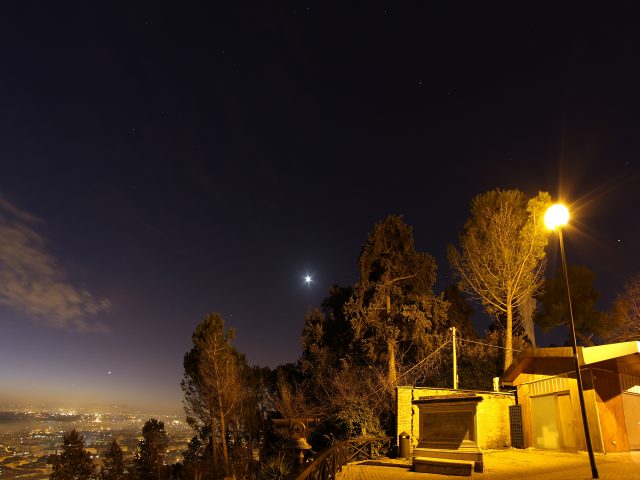 From left to right, there are Mercury, Venus (the brightest one), Saturn (close to Antares in Scorpius), the Moon, Mars (close to the top of a tree) and Jupiter (the bright object on the right border of the image).

Before to leave, I managed to grab another image of the full parade, this time including a tree to cover a nearby lamp, with a result I really like: 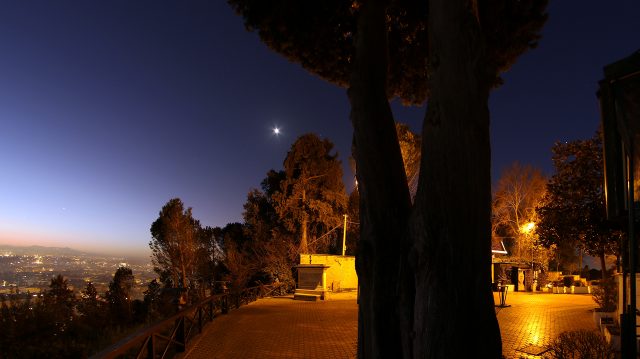 Both these mornings have been great, with some unforgettable views: while at the end I was very tired (quite busy days at work), I was happy for what I saw, what I imaged and, above all, what I felt, once again: those pristine, eternal emotions that the stars never fail to move in our soul and heart, every time we look up there, those ancient skies.