As you know, I always keep an eye on the full Moon, when it rises and sets, at sunset and sunrise, respectively. I’m always looking for new places from where it can be combined with something beautiful from Rome. And for the Summer Solstice full Moon I wanted our satellite setting beside the Great Synagogue of Rome: it turned out to be one of the greatest views ever. 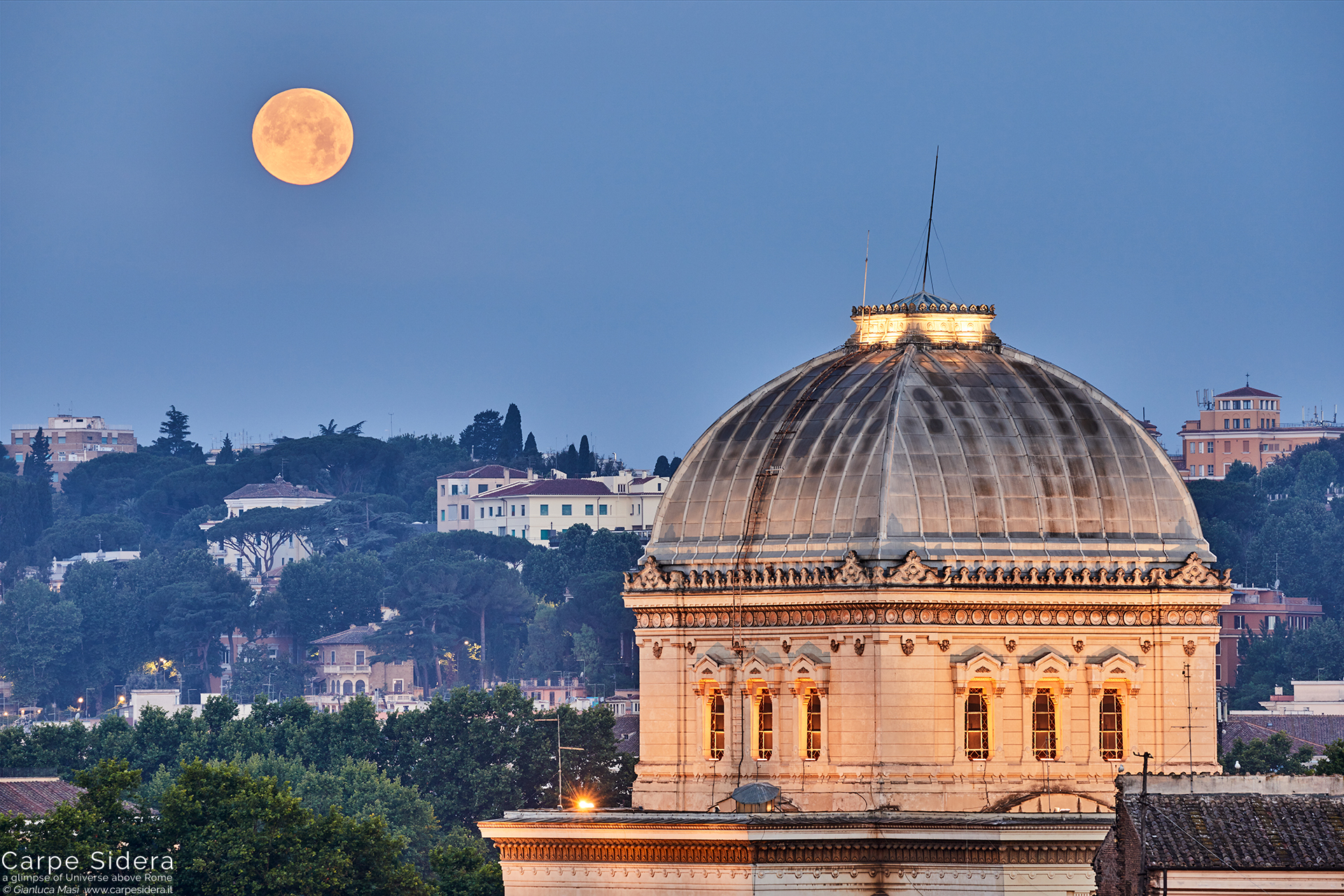 Tracking the full Moon over the year is always a fascinating journey for a photographer. Because of its motion across the sky, each full Moon sets and rises at different directions along the horizon, when seen from a fixed location. This just means that if you fix your place, each full Moon will set/rise behind different elements of the local landscape, exploiting a huge segment of your eastern and western horizon.

You can also use this in a different, opposite way: choose a monument and find from where you have to image it to include the full Moon when it rises/sets. This is a nice exercise to do, by the way!

While waiting for the 2019 Summer solstice full Moon, I spotted the Great Synagogue of Rome as a monument I wanted to image with our satellite and actually I did a first test in May, when I was lucky enough to get a nice result with the setting full Moon at dawn though the sky was cloudy all around. This experience convinced me to wait for the next, June 2019 full Moon for a new session, hoping for clear skies.

On Jun 16, the night before the full Moon, I did some tests on the setting Moon, which aligned as I calculated with the great Synagogue. It set while the sky was still dark (only the nominal full Moon sets at sunrise, of course), which was different from what I wanted to do, that is grabbing it in the light of dawn, but the view was superb. 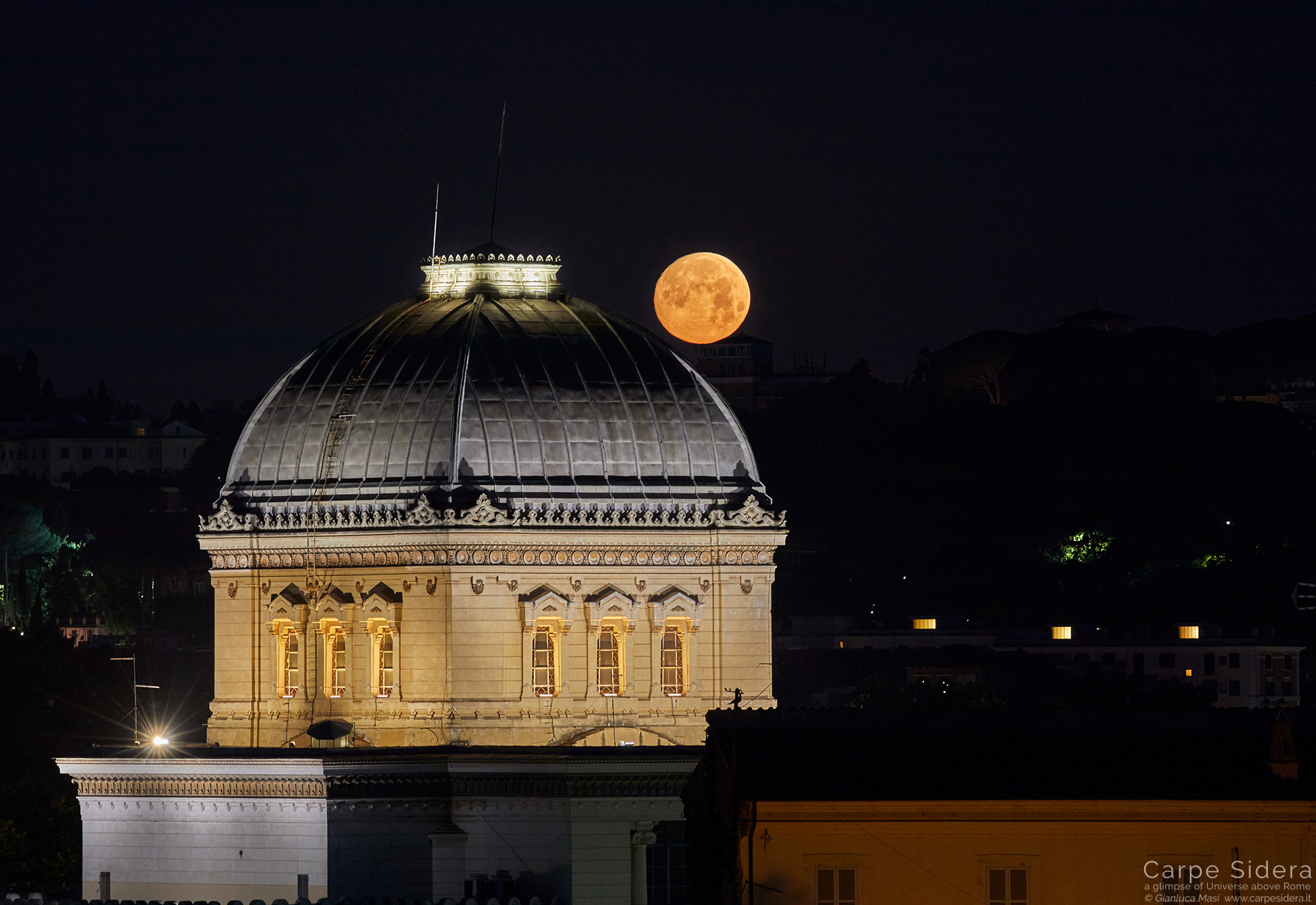 I could not wait for the next morning, when our satellite would have set in the first lights of the new day. On the early morning of June 17, I reached the same place as before, knowing the Moon was going to be on the left of the Synagogue, but with a completely different light all around.

I was ready to image in a few minutes, though very tired after two almost sleepless days in a row. 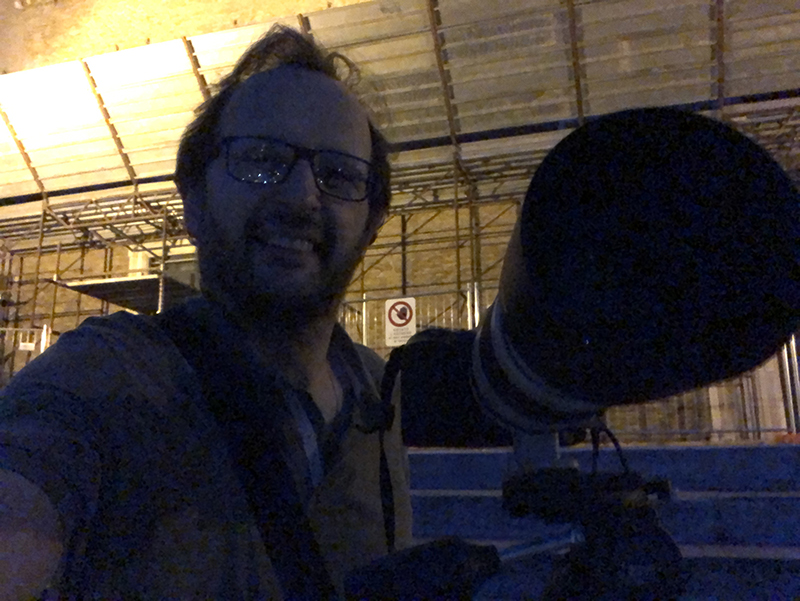 At work, early in the morning 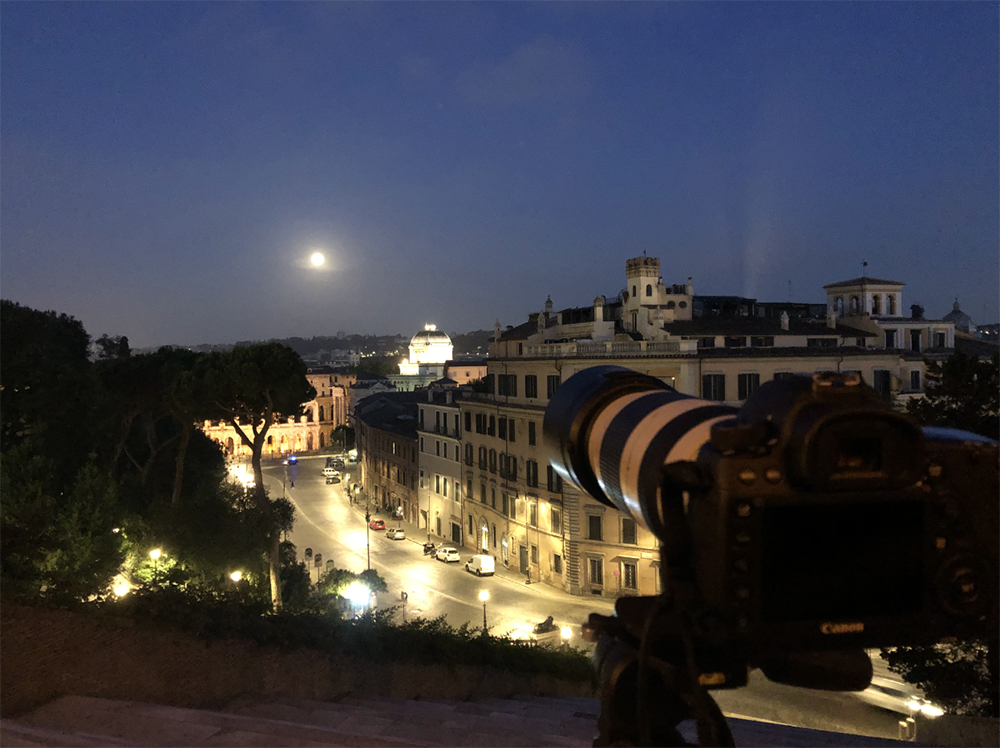 The imaging session is ongoing

Mr Murphy was acting in a friendly way, as the Moon was shining so beautifully and slowly approaching the Synagogue’s roof in a now very clear sky. The sight was superb, one of the best I ever had: truly magnetic! Looking at this in the silence was very touching. 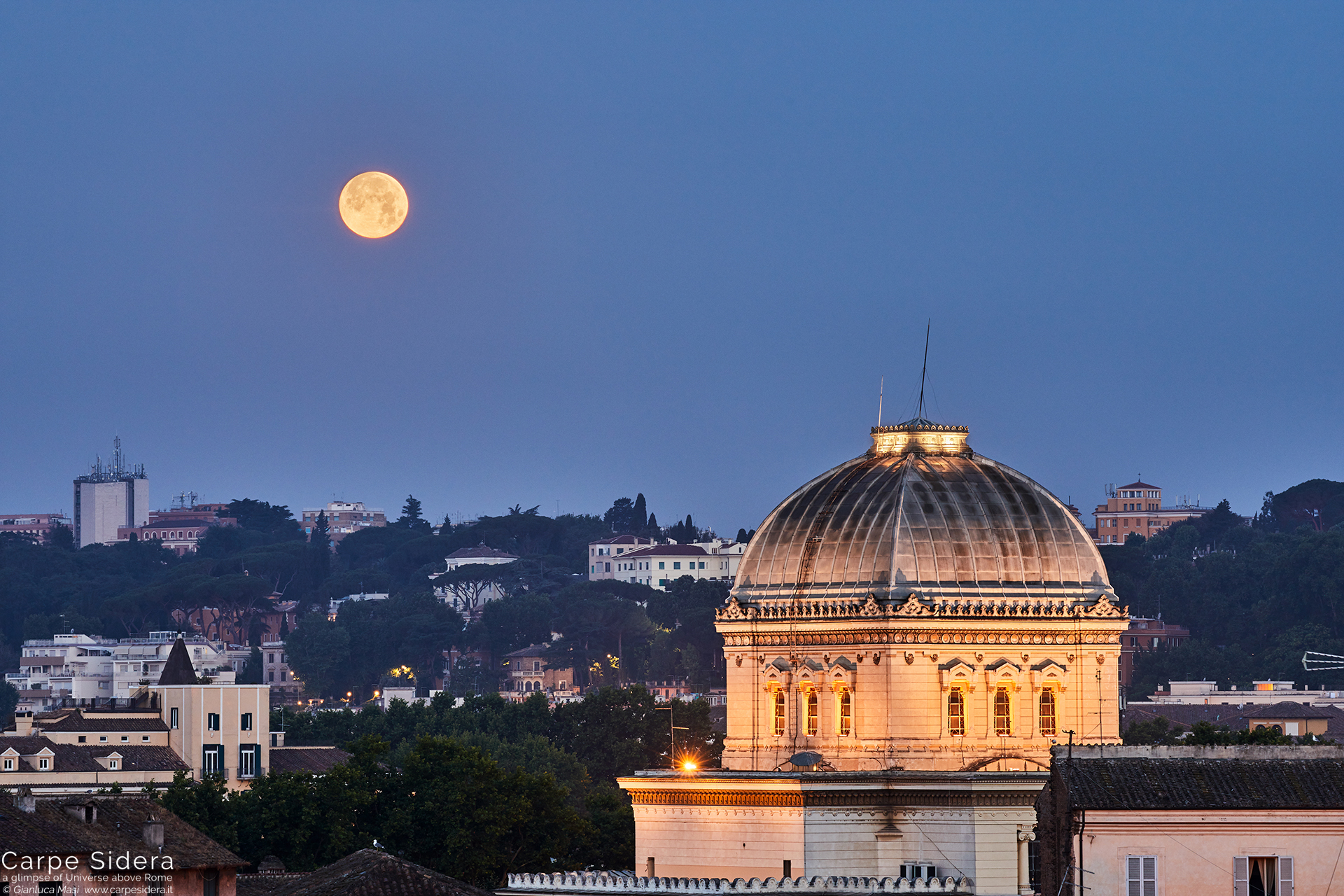 Minute after minute, second after second, the Moon was inexorably approaching the South-Western horizon, when the clouds showed again, partially covering the satellite. This made impossible for me to record the real setting of the Moon, but the vision was so extremely beautiful that I could only thank mother nature for this immense gift. 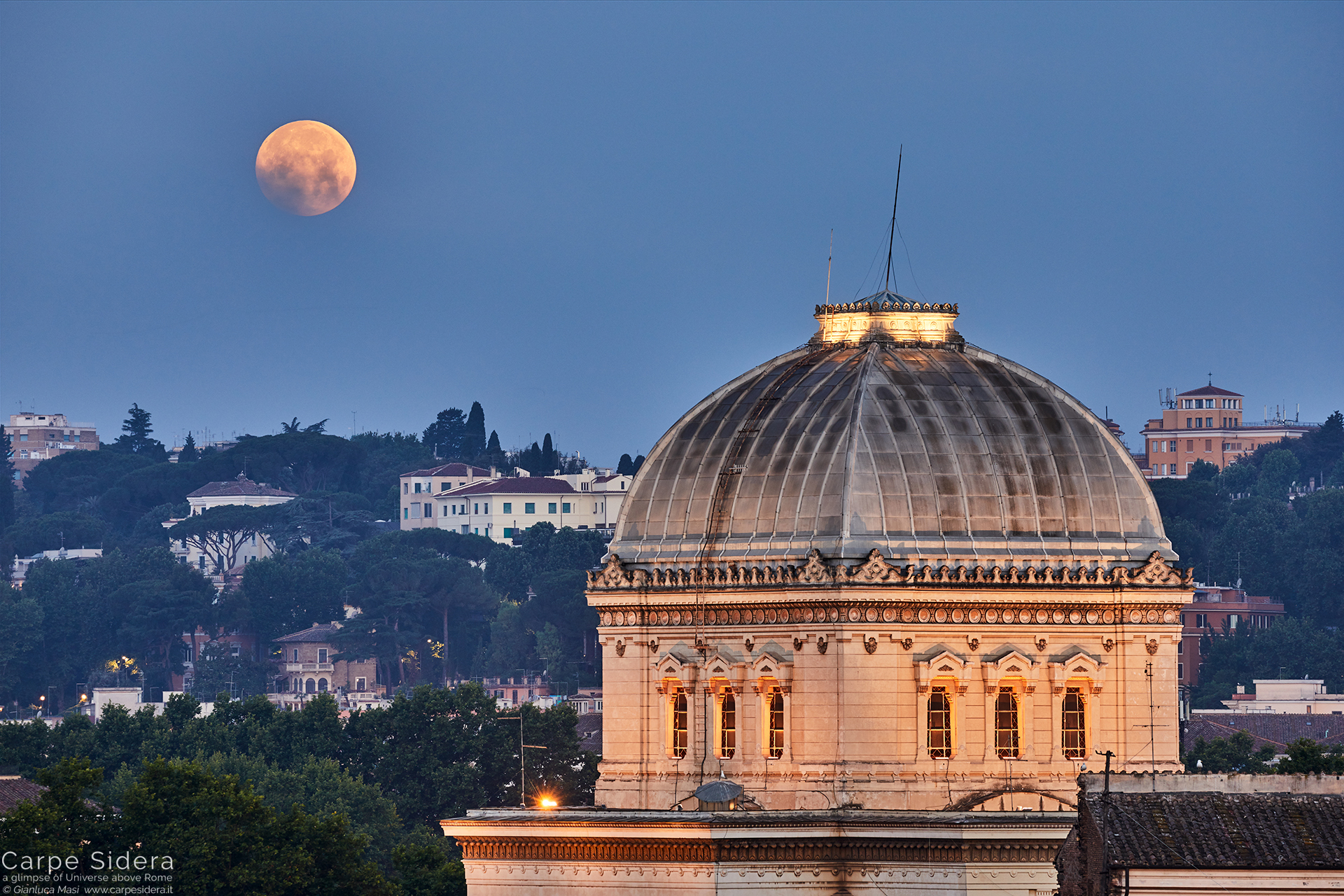 While it sets behind the Synagogue of Rome, the full Moon plays with some clouds

A few days later, I could show some of these images during an event part of the “Ebraica Festival Internazionale di Cultura” hosted by the Great Synagogue, making the connection between the Moon and the place so strong. 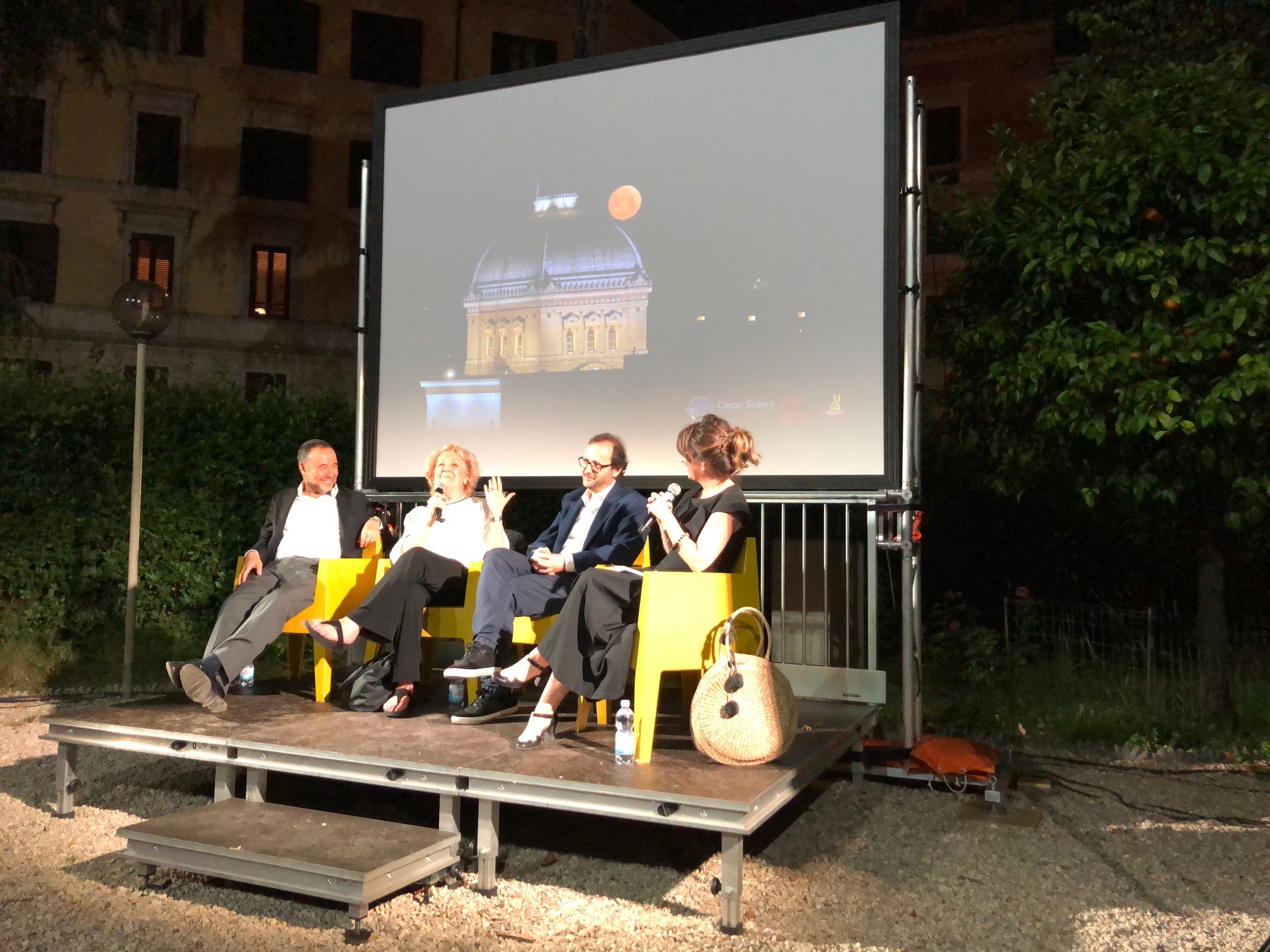 One of my images showed during the “Ebraica” festival 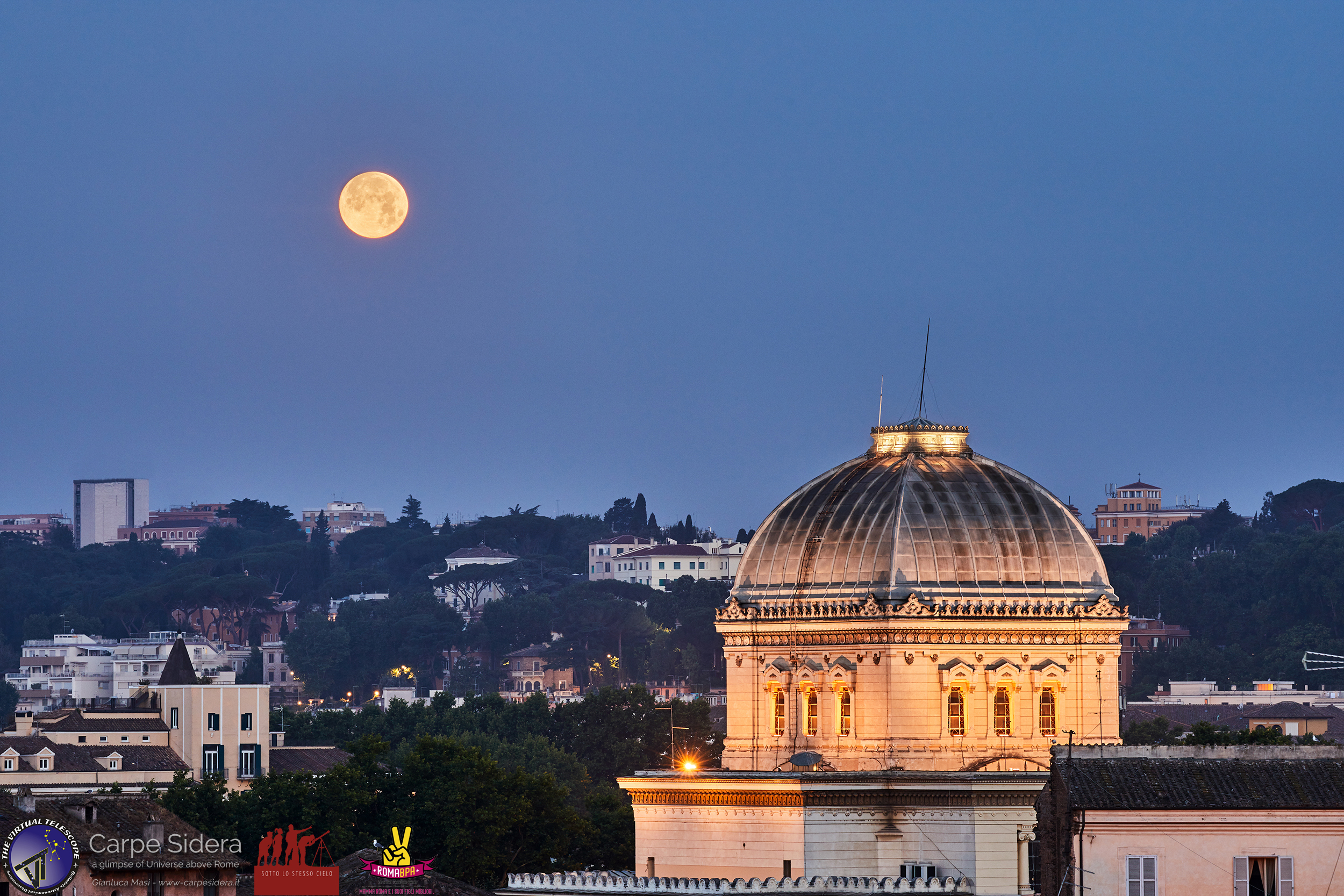 As we use to say, you are never tired to see beauty: so we are already looking for the next cosmic show.