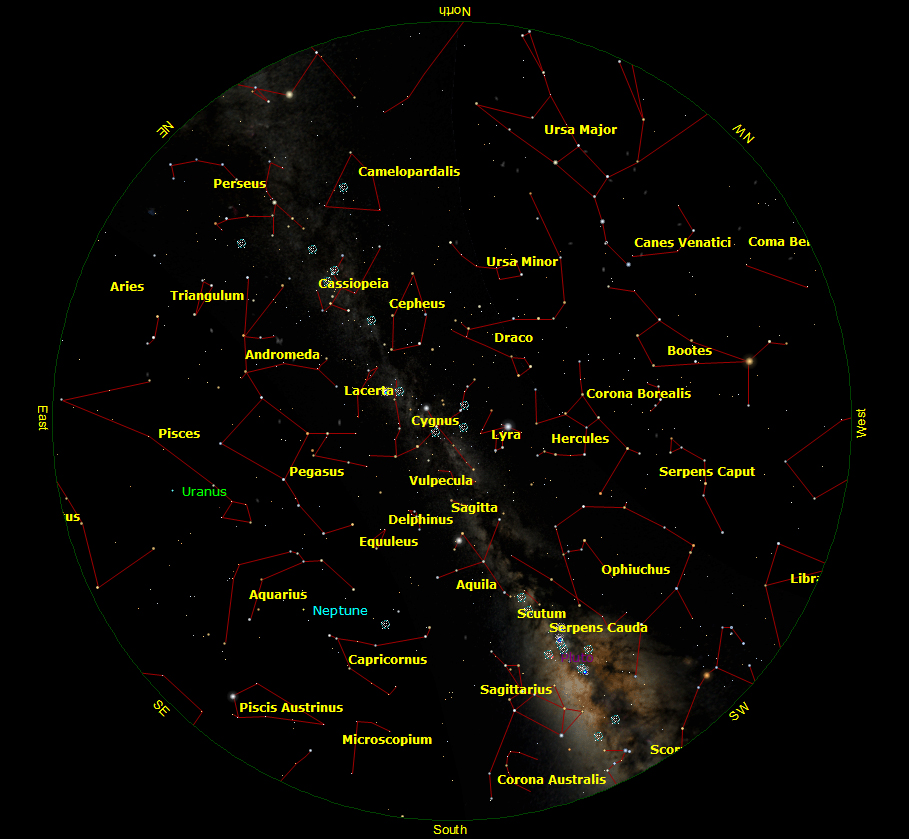 The short description below is valid for a latitude of +42 deg.

September is a very interesting month for northern observers. Summer is approaching its astronomical end, but the stars visible at the beginning of the night are the very typical ones f the season. The duration of the night is also significantly longer, so there is more time to spend looking up.

As soon as the sky is dark enough, Vega (Lyra) appears close to the zenith, with Altair (Aquila, south) and Deneb (Cygnus, east) completing the “Summer Triangle“. Looking north, the Big Dipper is drowning in the haze, low on the horizon, preparing to a minor role in Autumn. Of course, the Polaris is always there, ready to guide us through the heavens.

Around the Summer Triangle there are many gems waiting for you. You can still admire the wonderful globular cluster M13 in Hercules, bearable with the naked eyes under quite dark skies. It is a rewarding view with any instrument, it will impress you with many stars, if seen with a mid-sized scope. Not far from Vega, you can see M57, the famous “Ring” planetary nebula, quite bright: a binocular should be enough to spot it.

South, the Milky Way is still prominent, of course far away from light pollution: you can spot Sagittarius brushing the horizon, bringing M8 (the “Lagoon” Nebula), M20 (“Trifid” nebula), M17 (“Omega” nebula), M22 (an outstanding globular cluster). Overhead, Cygnus brings the wonderful double star Albireo, with its striking color contrast, visible with small scopes. Not far from there, in Vulpecula, the outstanding M27, the “Dumb-bell” planetary nebula will enchant you with its shape, vaguely resembling an hourglass in large-enough scopes.

East, the Autumn stars are climbing. The “Big Square” of Pegasus is already magnificent,with Cassiopeia introducing her daughter, Andromeda: these stars will tell us more next month.

No bright planets out there early in the night: Jupiter will rise later with the winters stars, while Neptune and Uranus can be spotted with a small binocular or a little telescope.

Back to “Monthly Skies”