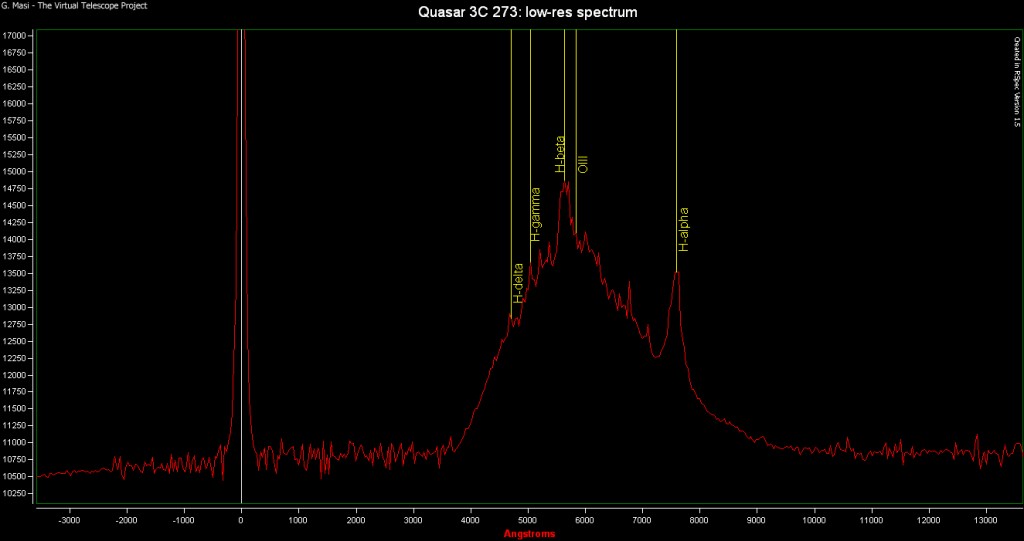 Recently, the Celestron C14 robotic unit has been equipped with a SA100 diffraction grating, making possible easy, low-res spectroscopy. After a couple of successful tests, we managed to measure the red-shift of quasar 3C 273.

This is a very energetic active galactic nucleus, the first quasar to be identified in 1963. Its distance is estimated in about 2.5 billions of light years. Pushed by the Hubble flow of the expanding universe, it shows a clear red-shift, that is its spectral features are shifted toward the red part of the spectrum. Measuring the apparent wavelength of a spectral feature and comparing it with the theoretical one, the red-shift can be easily obtained.

So, we tried to measure the red-shift from the hydrogen emission lines in the spectrum of 3C 273.

We captured four, 300-seconds CCD images of 3C 273, averaging them before the spectrum was measured. The resulting plot is visible above. The main hydrogen features are shown. For example, the H-alpha emission line is here located at 7602 Angstrom, while for a source without any radial motion it would be 6563 Angstrom. H-beta shows here at 5631A, against a laboratory value of 4861A. So, all of them are clearly shifted to the red (and the shift – not the red-shift! – is a function of the wavelength, so different lines have different shifts).

Z=(Lobs-Lemi)/Lemi, where Lobs and Lemi are the observed and emitted wavelengths, respectively. Let’s measure Z for H-alpha and H-beta and then average them:

This value is in excellent agreement with the red-shift z=0.158339 in the NASA/IPAC Extragalactic database.

It was a great experience!