Late last August, several observers (F. Manzini, V. Oldani, and A. Dan, Stazione Astronomica di Sozzago, Italy; R. Crippa, Osservatorio di Tradate, Italy; and R. Behrend, Geneva Observatory) noted that comet C/2011 J2 Linear was apparently showing a second condensation, suggesting the splitting of the nucleus. The second fragment was about 7.5″ from the main one and was 1.5 mag fainter than the latter.

This very interesting observation was promptly shared among a small group of observers, including the Virtual Telescope and we managed to provide precious follow-up during the confirmation process, before the discovery was made public.

The first observing night was Sept. 7, when a very bright Moon was making the detection of the faint component a real challenge. We used the powerful, 17″ robotic unit, grabbing several long exposure images. The resulting, average image is below. 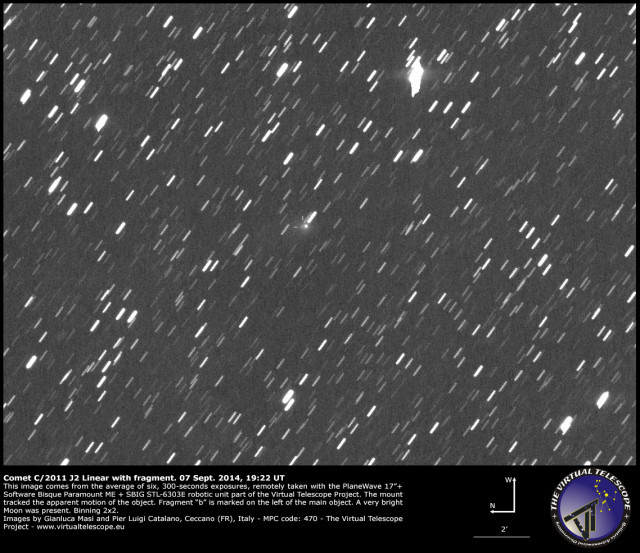 Looking at it, the fragment b of comet C/2011 J2 is readily visible, despite the very strong interference of the Moon; we managed to report all the data to both the Central Bureau for Astronomical Telegrams (CBAT) and the Minor Planet Center (MPC). We also noted as the fragment was surrounded by a small coma, a few arcseconds large. The main and the secondary objects were about 10″ apart.

A few nights later, on 12 Sept., we used the same telescope, under better skies, to detect the fragment again, as shown below: 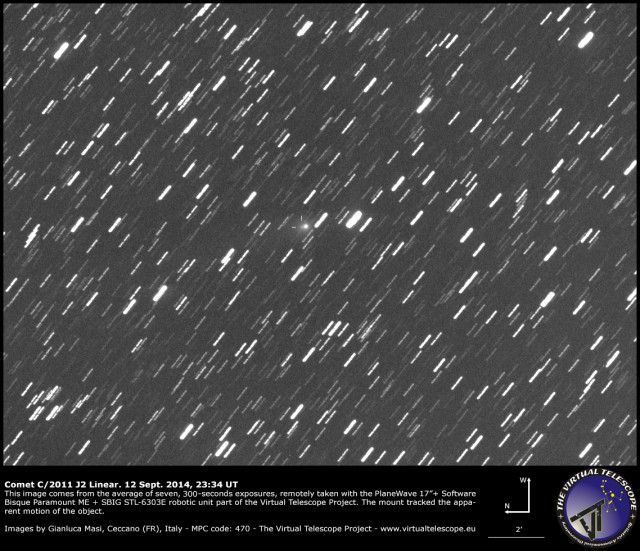 The secondary component is better visible, thanks to the darker skies, though still not at their best. the angular separation is similar to what measured the first night.

A third observing session was scheduled for the following night, 13 Sept., when the Moon was finally leaving a long enough observing window to operate under better conditions. This time, images were median combined, to limit the impact of star trails on the visibility of such a feature. Below is the resulting image: 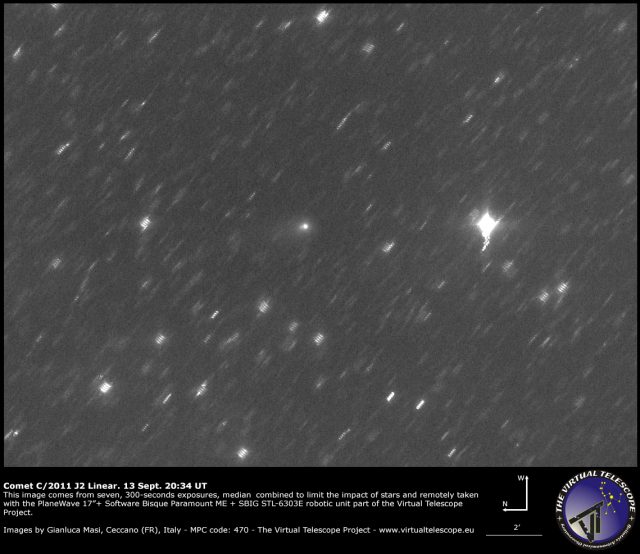 All the observations above were performed remotely operating the 17″ robotic unit part of the Virtual Telescope. The observing team was composed by Gianluca Masi and Pier Luigi Catalano.

On 19 Sept. 2014, the CBAT issued the CBET Circular 3979 (subscription required), announcing the discovery and reporting our contribution during the confirmation work.