Near-Earth asteroid 2012 TC4 coming very close this October: we are ready to show it to you

The near-Earth asteroid 2012 TC4 will safely come very close to us next 12 Oct. 2017. We already captured it last time, in 2012, when this 20 meters large object was discovered, and we are now ready to share with you in real-time this upcoming approach. 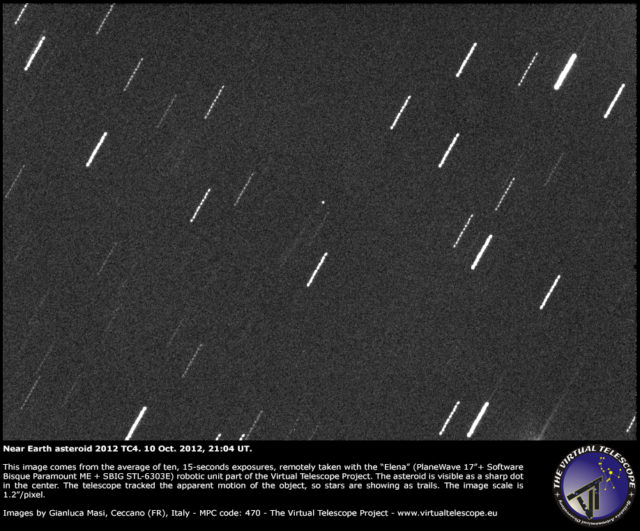 Of course, at Virtual Telescope Project we managed to capture 2012 TC4, as we always do with asteroids coming that close, also providing astrometry to refine its orbit. We imaged it while it was approaching us and the picture above comes from the average of ten, 15-seconds exposures, remotely taken with the “Elena” (PlaneWave 17″+Paramount ME+SBIG STL-6303E) robotic unit) available at Virtual Telescope. The robotic mount tracked the fast (190″/minute) apparent motion of the asteroid, so stars have left trails, while the asteroid was perfectly tracked: it is the sharp dot in the center.

After exactly five years, next 12 Oct. 2017 the near-Earth asteroid 2012 TC4 will come to visit us again, offering another close approach. How close? After five years since the last observation, there is some uncertainty on its actual position and the minimum distance, which will be no shorter than 6800 km from the Earth surface, but more likely will pass at 270.000 km, JPL said. The minimum distance depends on the Minimum Orbit Intersection Distance, (MOID) between the Earth and the asteroid orbits.

Near-Earth asteroid 2012 TC4 moves across the stars on 10 Oct. 2012. It clearly shows evident brightness variation while it spins. CLICK ON the video for better resolution.

Needless to say, 2012 TC4 has to be recovered, first. These next weeks, large telescopes will be used for this purpose, and this rock will be used to test NASA’s network of observatories and scientists working with planetary defense.

We, at Virtual Telescope, will plan a live, online observing session soon, so stay tuned!