We could see all the planets of our Solar System at a glance and shared the experience with the community worldwide. Here we present our best images. 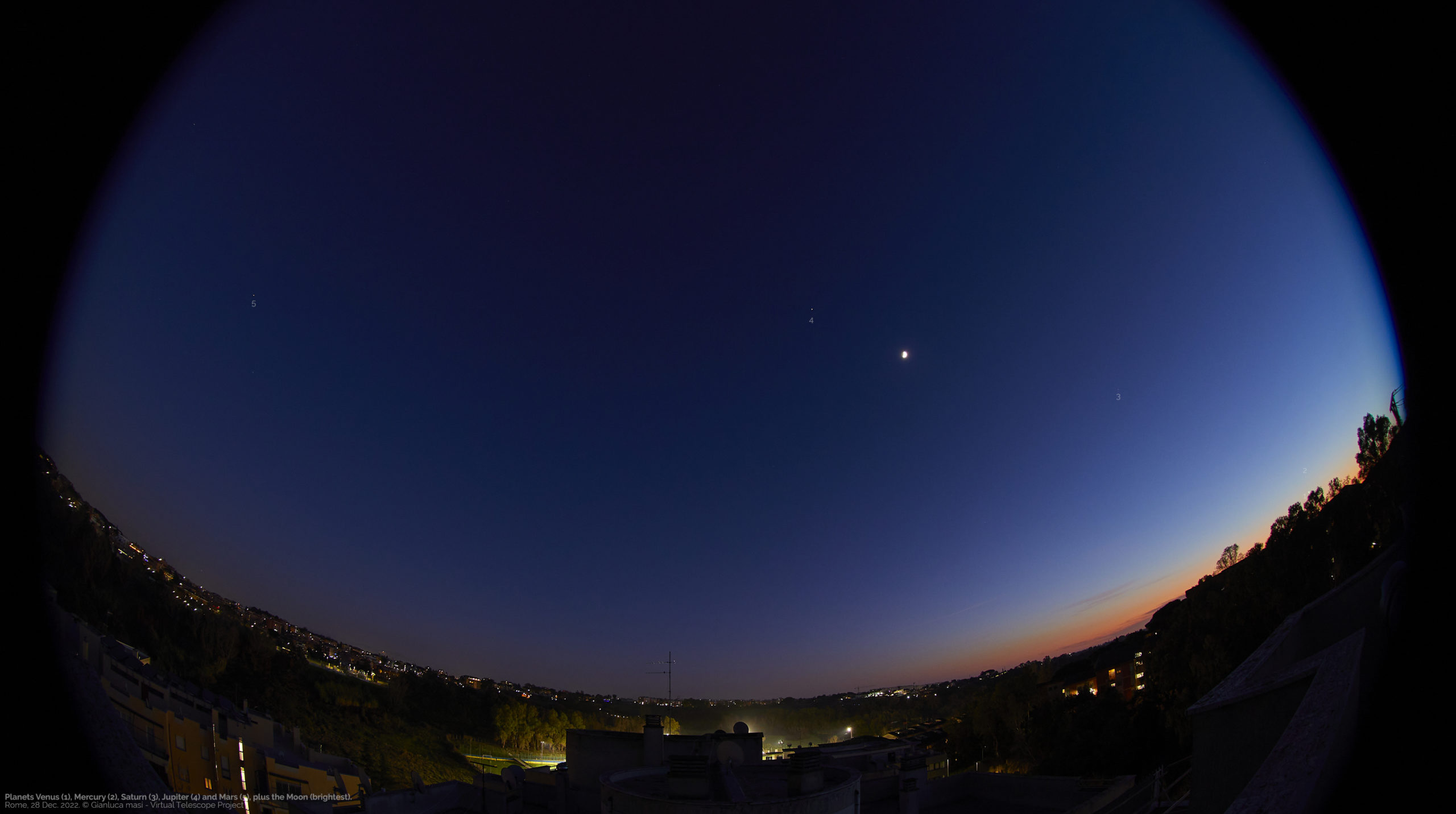 From time to time, we can see all the worlds of our Solar System together, like a planetary parade. This happened last time at dawn in June, and again at the end of the year, at sunset: a very beautiful Christmas present from the sky. I managed to capture some great images and share the view with the world.

On 28 Dec. the sky was clear in Rome, Italy, after plenty of cloudy weather. It was one of the last opportunities to have a decent look, as Mercury was already quickly fading and moving back into the solar glare. I decided to use both an extremely panoramic “fish-eye” lens (providing a 180-deg. field of view, capturing all the naked eye planets at a glance) and a 70-200 zoom, to get some close-ups of each planet. The imaging gear was ready to go before sunset, installed on the roof of my house in Rome.

Soon after sunset, the Moon, Mars, Jupiter and Venus were easy to see, with Saturn joining the show a bit later. Mercury was much harder: on the previous evenings, I could spot it easily by naked eye among the clouds, this time it was significantly fainter and I could barely see it with the unaided eye just before Venus moved behind the trees. Luckily, I succeeded capturing all of them with my “fish-eye” lens, see above.

Taking close-ups was much easier, as I could select the best camera/lens settings for each planet. Venus and Mercury were so beautiful, showing in such a colorful sky just above the S-W horizon. 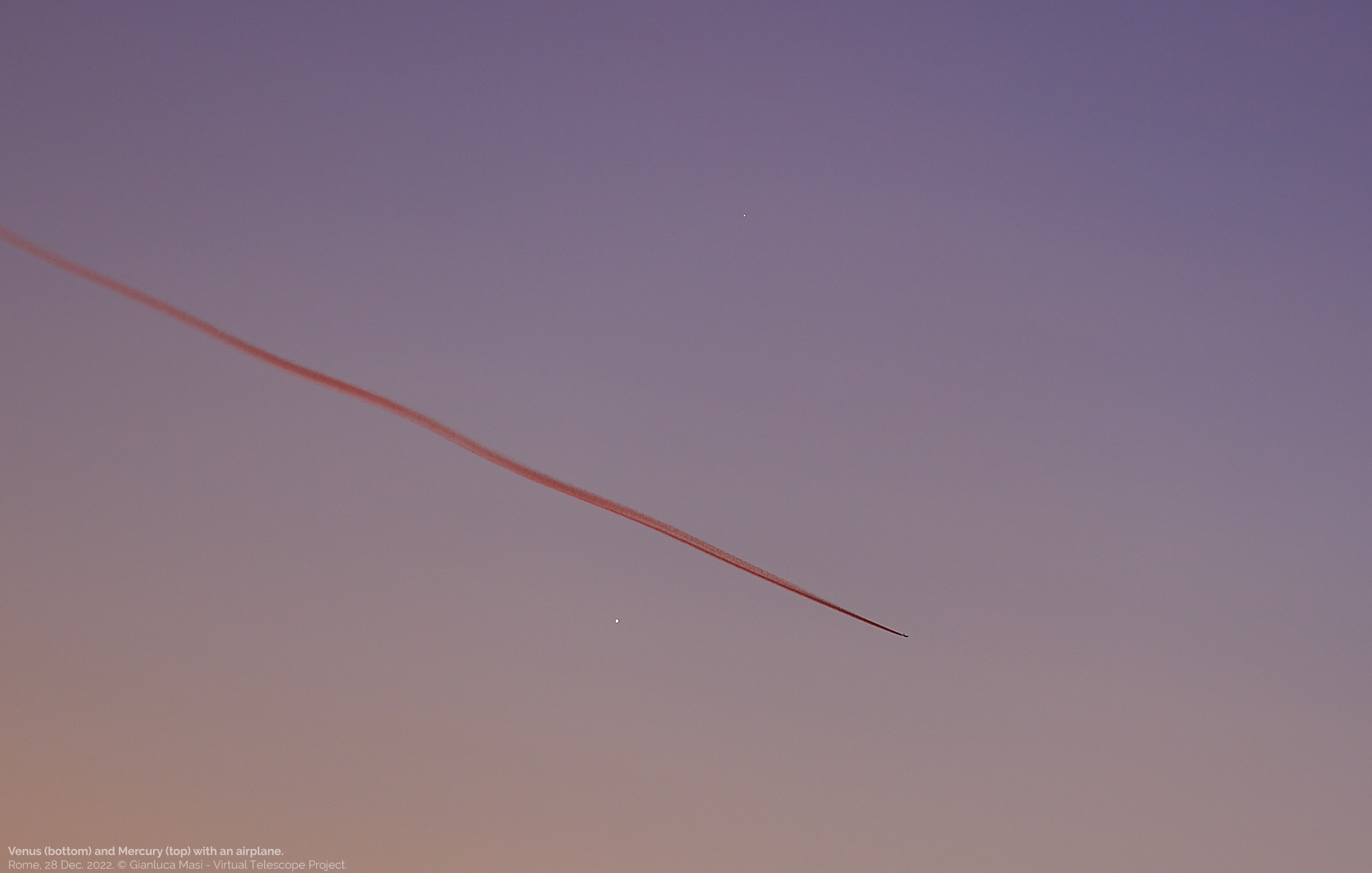 Venus and Mercury, the innermost planets of our Solar System, with an airplane. 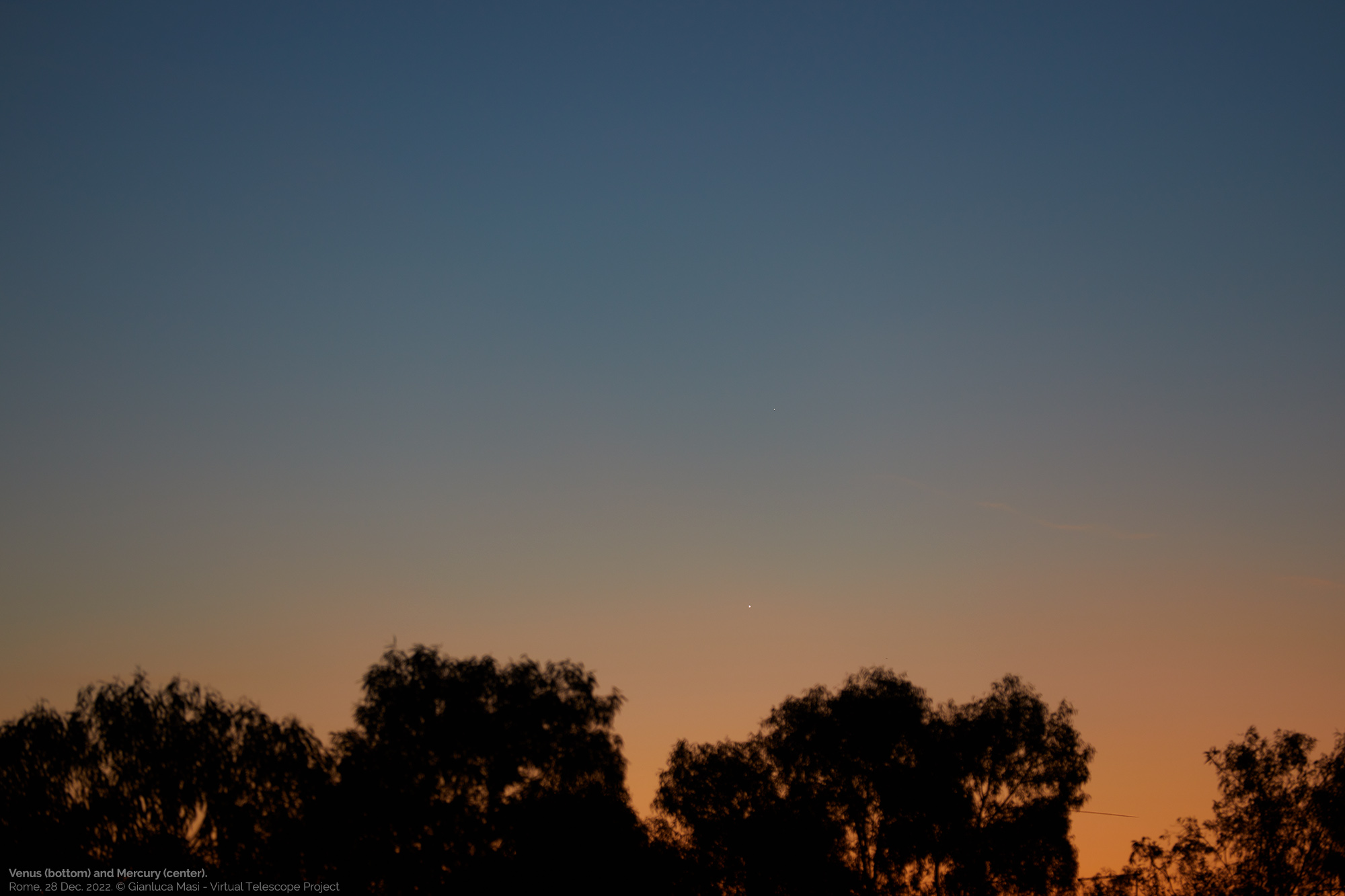 Venus and Mercury shine in a very colorful sky.

Moving East, the next planet of the parade was the Lord of the Rings, Saturn, not far from the stars Nashira (Gamma Capricorni) and Deneb Algedi (Delta Capricorni). 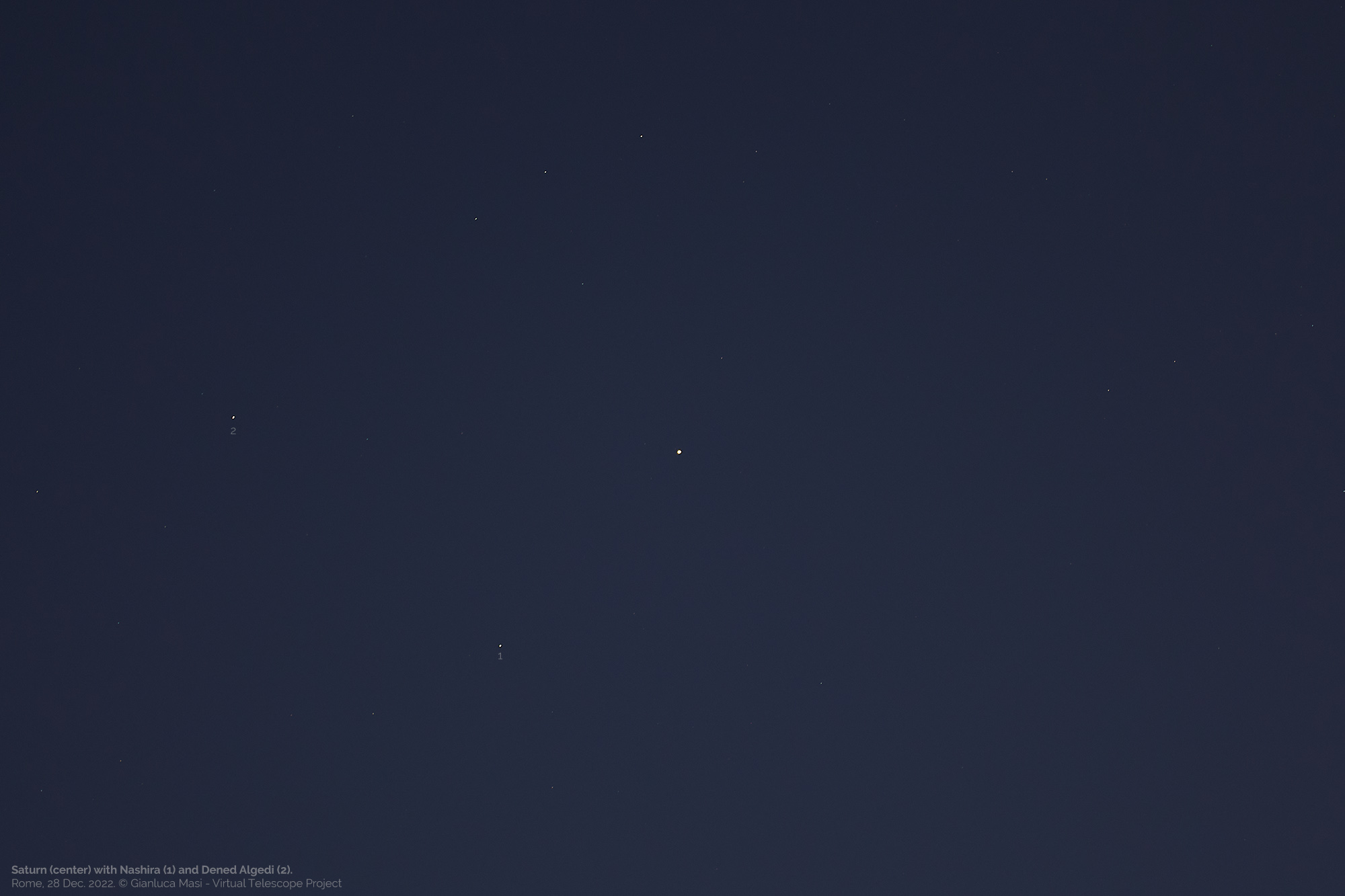 Saturn, with the stars Nashira and Deneb Algedi in Capricornus.

Then, I moved to Jupiter and the Moon, knowing that Neptune (too faint to be visible by naked eye) was in the same spot. Note three of the four Galilean moons close to Jupiter (from the left: Callisto, Ganymede and Europa; Io was too close to the planet). 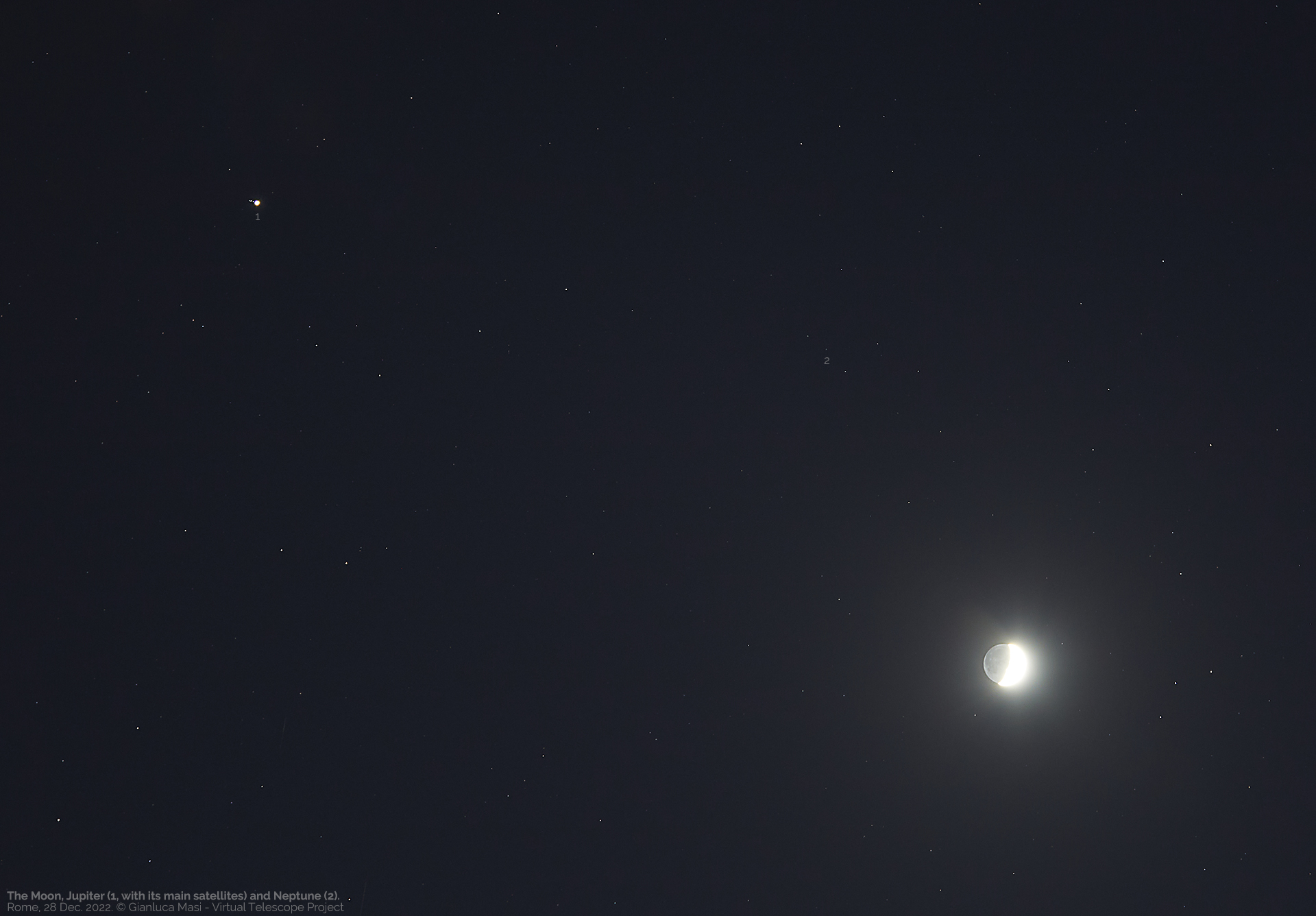 The Moon, Jupiter with its satellites and Neptune.

Uranus was the next step: while not visible to the unaided eye, it was very easy to capture, not far from the stars Hamal (Alpha Arietis), Sheratan (Beta Arietis) and Mesarthim (Gamma Arietis). 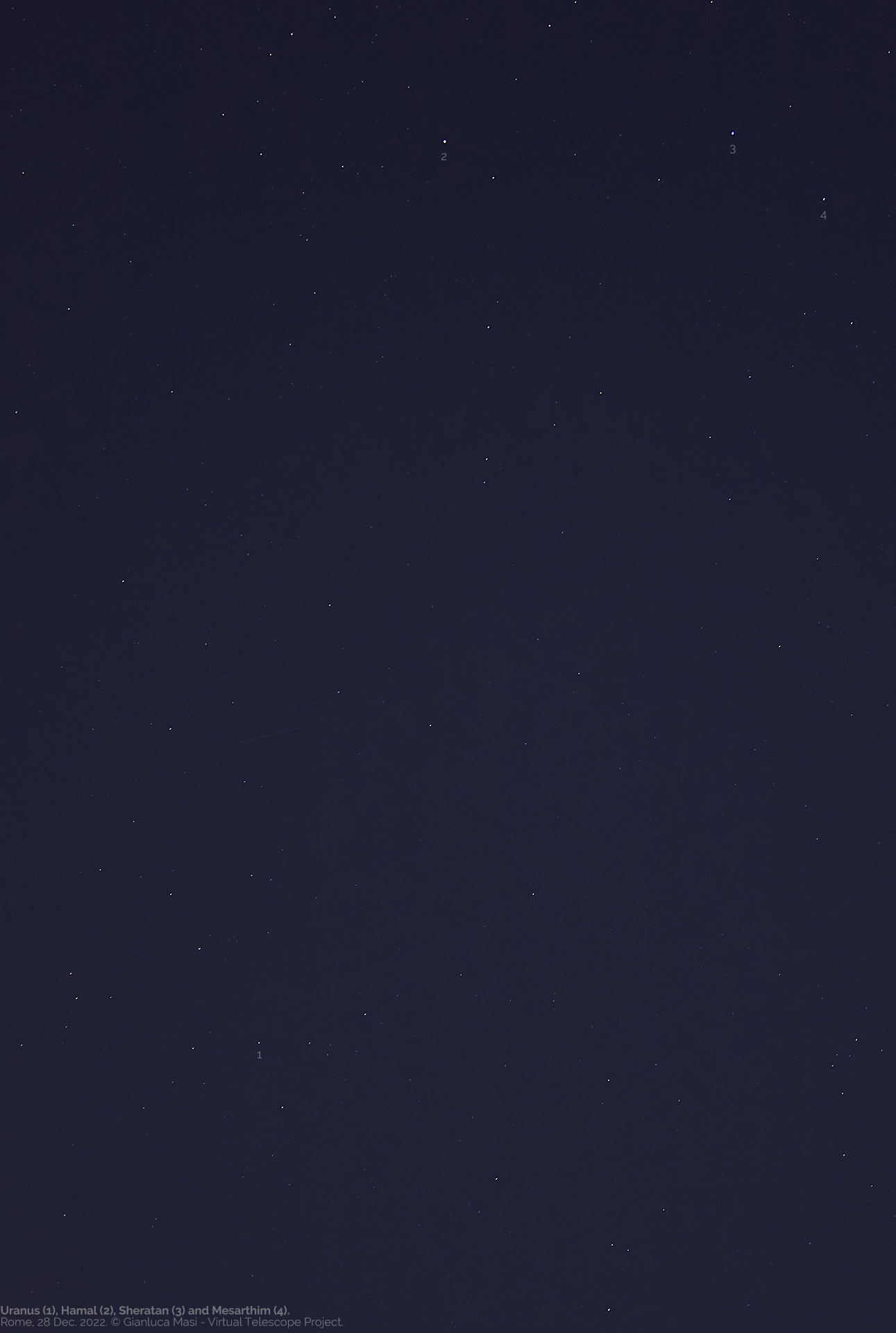 Uranus, with the stars Hamal, Sheratan and Mesarthim.

The final stop was on Mars, the Red Planet. Still very bright after its opposition earlier this month, it was shining not far from Aldebaran (Alpha Tauri), both sharing the same orange hue. 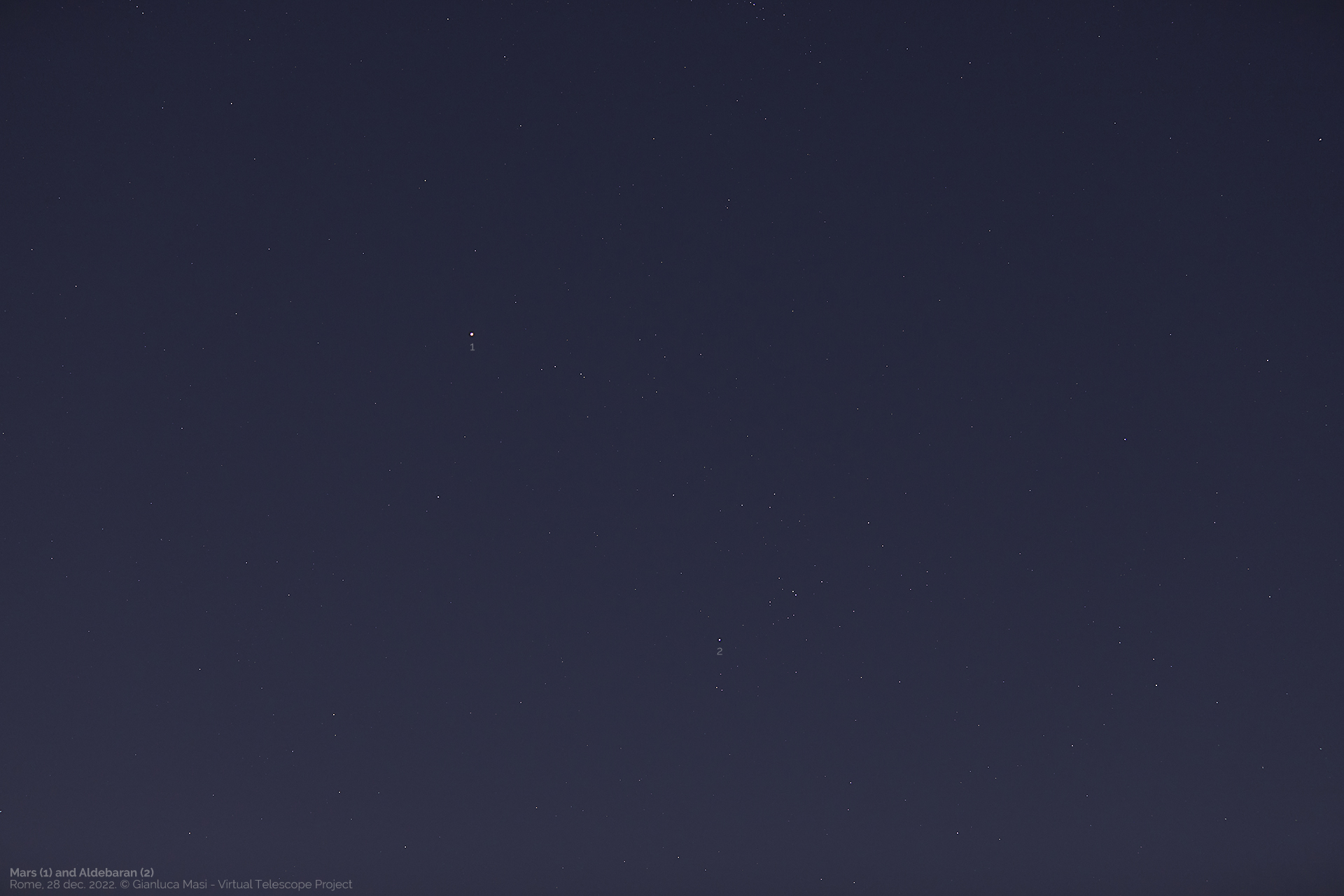 Mars and Aldebaran, the brightest star in Taurus.

Below is the podcast from the live feed where we showed our images.

I was happy to share all this with you, I’m already looking forward to the next cosmic show to bring to our community.