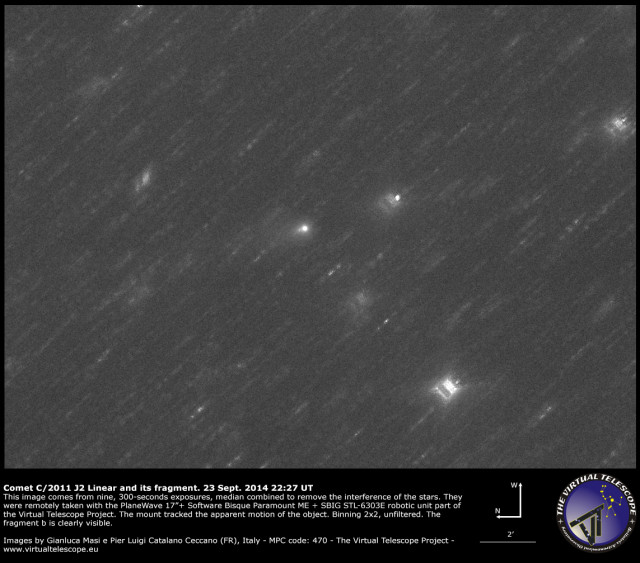 As previously reported, at Virtual Telescope we provided a precious follow-up to confirm the nucleus splitting of comet C/2011 J2 Linear. Eleven days after our last observations, we managed to slew again the 17″ robotic unit to this comet, under relatively good sky conditions.

The image above comes from nine, 300-seconds exposures, remotely taken with the PlaneWave 17″ + Paramount ME + SBIG STL-6303E robotic unit: they were processed using a median combination, to suppress the interference of the stars as much as possible, a potential factor limiting the visibility of the  subtle fragment. Looking at the resulting frame, the fragment is very well visible. The mount tracked the apparent motion of the comet and all the images were centered on the comet itself.

Accurate astrometry showed that the fragment is at about 13″ from the main nucleus, against the about 10″ we recorded in our previous images. Below is an animation showing how the fragment separated by the main component in the 11 days between our two observations.

All the data were sent to the Minor Planet Center.