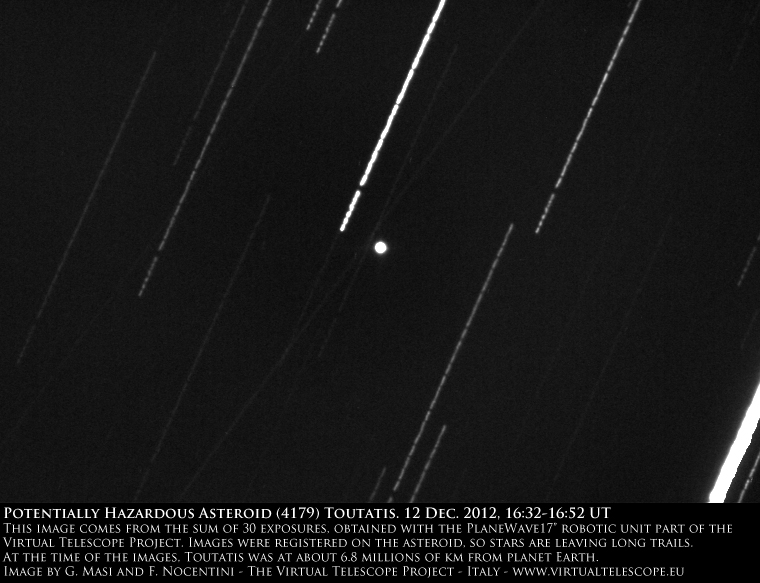 The Potentially Hazardous Asteroid (4179) Toutatis, imaged at the Virtual Telescope

The race is over. While I’m writing this, the potentially hazardous asteroid (4179) Toutatis is on its orbit, leaving us after the close encounter it had with the Earth on Dec. 12. It was a great event, with this 4.6-by-2.4-by-1.9 kilometers rock flying out there at a relative speed of 12 km/s.

This close encounter received a lot of attention by the media and it was followed by a lot of people worldwide, often fearing Toutatis was going to hit our precious planet. Of course, there were no risks of collision at all, as the minimum distance was around 7 millions of kilometers (18 times the distance of the Moon), scientists were crystal clear in that sense, but still the catastrophic scenery was quite popular. Maybe because we are so close to the acclaimed end-of-the-world, which is, of course, a completely false idea, a mediatic fake.

These very popular events are an amazing occasion for those working in science communication. They help reaching a huge audience and trying to share the wonders of modern science and what we learn about the Cosmos and nature in general. A precious chance to try fixing the real terms of some hot topics, often completely misunderstood.

After many years of experience, I can say that no astronomical object can compete with a close approaching asteroid in capturing the imagination of the public. The chance of an impact is quite likely the main reason. It is a fact that asteroids do hit our Earth, this happened several times over the last few tens of millions of years, but a wrong perception of the real risk is truly dominant.

The event we organized at the Virtual Telescope to show Toutatis online, in real-time, turned out to be a giant success. We had three live sessions (11, 12 and 13 Dec.), also posting many updates, images, movies and finding charts. More than 220.000 individuals from 188 Countries jumped into our website looking for Toutatis from 3 to 13 of Dec. It was by far the most popular event ever hosted by our project.

I will miss Toutatis. I did observe it in 2004 from Chile, while it approached us much closer than this year and will wait for it next 2016, though it will be a less intriguing event. I’m already brewing some coffee for the party.

We wish to thank all of you and we are already looking forward to see you again, maybe following asteroid 2012 DA14 next Feb. 2013, for a truly record approach!