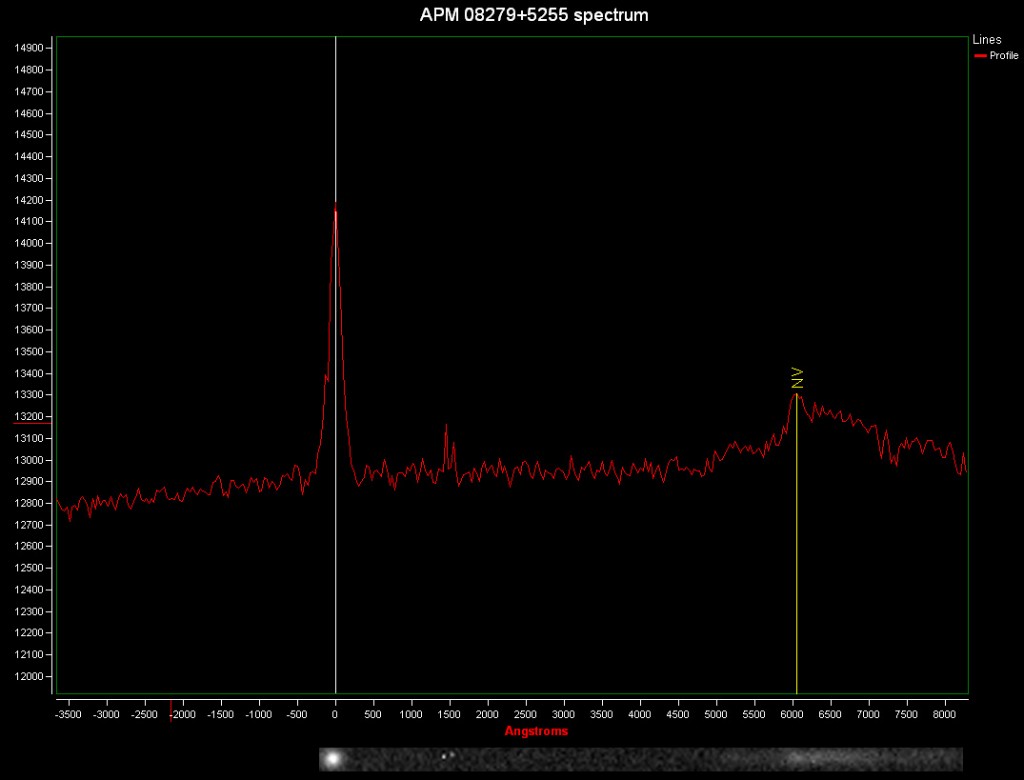 After the very positive results with quasar 3C 273, we tried to get a spectrum of APM 08279+5255. This quasar is shining at mag. 15.2 and is located at a distance of 12 billions of light years, significantly more than [HB89] 1758+388. Succeeding in this task could have a double value: 1) the new target would be the more distant object ever observed at Virtual Telescope: b) it would be a great opportunity to measure the redshift for such a distant object.

APM 08279+5255 is an incredible “monster”; it produces as energy as a thousand trillion Suns and hosts a black hole with an equivalent mass of 20 billions of Suns. Furthermore, it shows a gravitational lensing effect with three sources, which is quite rare (lensed quasars usually show a pair number of “copies”). Finally, in its surrounding there is the most impressive reservoir of water known, 140 trillion times all the water in the world’s oceans.

On 9 April 2013, while the sky was initially cloudy, a break made possible to open the observatory and slew our Celestron C14 robotic unit to APM 08279+5255. Weather was unstable, with no warranties to give enough time for a reasonably good work. Nevertheless, the system started getting 300-seconds exposures, with the diffraction grating into the optical train. Unfortunately, clouds were back soon and only 4 frames were saved.

While the total exposure was so short, we managed to reduce the spectrum anyway and… we were largely rewarded! While the spectrum is noisy, a key feature is visible to really try to measure the redshift: there is the clear signature of the NV emission. This line is, in steady conditions, placed at 1241 Angstrom, while here, because of the recession speed, it shows at 6050 Angstrom.

Above, the spectrum is shown, with below the original image, scaled to follow the spectrum itself. Spectrum was processed with RSpec.