Messier 42, the Great Orion Nebula: a new look by the Virtual Telescope 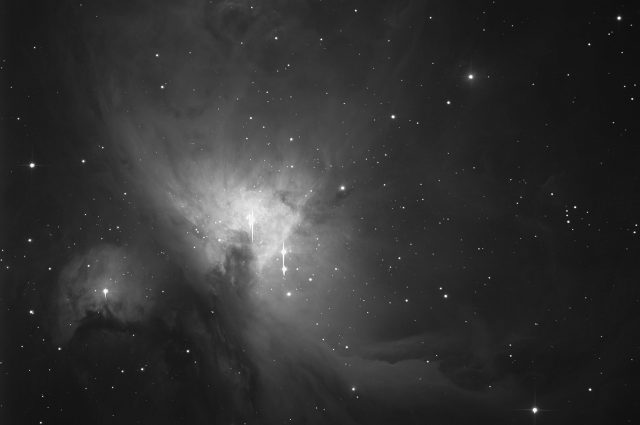 For sure, Messier 42, the Great Orion Nebula, is on the podium of the most observed deep sky object out there. To the point that it is almost impossible to resist to image it, once the Hunter Orion is shining with its famous stars.

Picking it late at Summer or early at Fall, always gives you some winter flavor. At the observing site of the Virtual Telescope, much earlier than the project was started, it was the first deep sky object the author observed with its first serious scope in the early ’80s. Since then, many time it was inspected visually from there, a few years ago with a 12″ dobsonian telescope, providing one of the greatest sights the author ever had.

Last night, the  PlaneWave 17″+Paramount ME+SBIG STL-6303E robotic unit captured 13, 15-seconds exposures, later averaged and gently processed to resemble the smooth, visual impression as much as possible. Messier 42 never fails capturing the imagination with its many details, sometimes very evident, sometimes very subtle and shows the bright stars sitting in the center (the “Trapezium”): what a beautiful nursery of stars!

Located somewhat at 1900 light years is a treasure of the night sky.