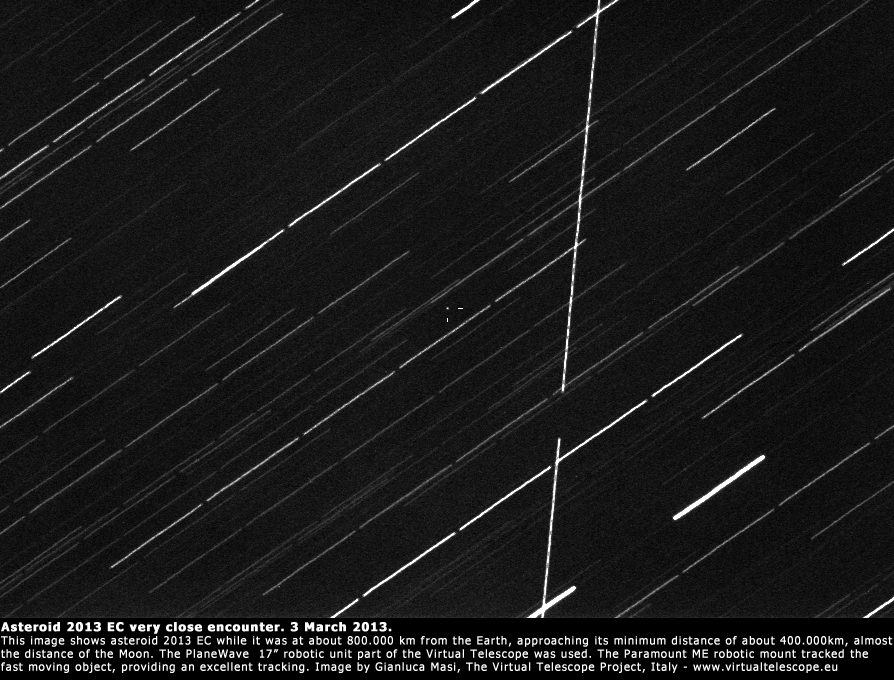 On 2 Mar. 2013, asteroid 2013 EC was discovered by the Mt. Lemmon survey and it showed an orbit bringing it quite close to the Earth. On March 4, it will reach a minimum distance of about 370.000 km, basically the distance of the Moon.

About 10 hours earlier, at the Virtual Telescope we planned observations of this rock, sharing images and comments with the public in real time, via our webTV. At that time, the asteroid was moving at about 150″/minute.

The Planewave 17 robotic unit captured many images, each with an integration time of 90 seconds, corresponding to a shift of 225“. The object was fainter than magnitude 17.3, so being very critical to be imaged. The robotic Paramount ME equatorial mount, controlled with TheSkyX Pro made possible to track this object amazingly well, while its apparent motion was significantly increasing minute after minute. The vertical trail is an artificial satellite.

The image above is the average of five images and the asteroid is perfectly visible in the center of the picture. It shows so well how advanced and realiable the robotic telescopes part of the Virtual Telescope Project.

Below is an animation coming from 42 frames, taken back to back, with the same scope, during our live show on this asteroid.